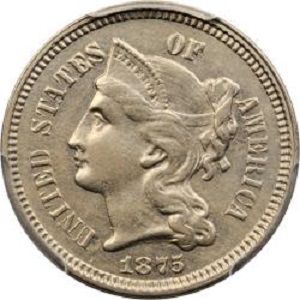 When it comes to coin collectors, there are a boatload of US coins that can be described as valuable and must-haves. While that is so, few are more sought after than the 1875 Three-Cent Nickel. Though there are many reasons why collectors love this coin, it really comes down to the obscurity of a piece that was only produced for a short period of time, then never produced again.

In the eyes of collectors, the only Three-Cent Nickels worth collecting are those that have been graded. Due to these coins being so old, even the most marginal signs of wear and tear mean a difference in the value of the coin. Below, you will find the different coin grades as well as what those grades mean for the appearance of the 1875 Three-Cent Nickel.

Uncirculated: A Three-Cent Nickel that has been graded as being Uncirculated is one that never spent any time at all in circulation. Because of this, these coins will have had their condition perfectly preserved throughout the years.

Extremely Fine: A coin that is determined as being Extremely Fine is one that was likely never circulated, but also one that does feature some damage. Whether it be a single, small scratch, or some other minor blemish, there are will be some signs of damage.

Fine: Fine is the grade given to Three-Cent Nickels that have been circulated, but have not been so heavily damaged. Thanks to years and years of exchanging hands, these coins will feature light scratching and chipping on their surfaces, but other than that will appear to be in decent shape.

Good: Good is the grade given to Three-Cent Nickels that have been very heavily circulated and damaged. These coins might have had their raised imagery and lettering compromised due to smoothing over the years, but the fact that these coins have survived 100+ years is something to marvel at in and of itself.

In order to determine a price for the 1875 Three-Cent Nickel, you really don’t need to look much further than the condition the coin is in. Because these coins are so old, those that have been well-preserved throughout the years are the ones that will cost the most. Even the tiniest differences in condition can mean massive differences in price. Below is a chart aimed at giving you a better idea as to what an 1875 Three-Cent Nickel will cost given its condition.