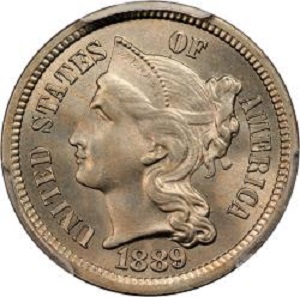 Most every Three-Cent Nickel is valuable in the eyes of collectors, however the 1889 variety is particularly special because it is the last year in which the coin was produced. Not only that, 1889 was the last year the three-cent denomination was ever used on a coin, making it a piece of history as well. Being that the number of Three-Cent Nickels available decreases each and every year, now is as good a time as ever to get your hands on one.

As for the coin’s appearance, the obverse side depicts the image of Lady Liberty facing leftward. Though she looks on the coin a bit different from the Statue of Liberty, the level of detail seen in the design is impressive. Surrounding the central image is a raised inscription which reads “United States of America.” Directly beneath the image of Lady Liberty is the 1889 year of minting. Finally, the outer edges of both the obverse and reverse sides of the coin are reeeded.

Uncirculated: If a Three-Cent Nickel is determined to be of Uncirculated grade, this means that it had never spent any time on the open market. Because of this, the coin will look today exactly how it did when it was first minted all the way back in 1889.

Extremely Fine: Extremely Fine Three-Cent Nickels were probably never circulated, however they will play host to some minor damage. Whether we are talking about a few scratches or a few chips, there will be some element of damage on the faces of these coins.

Fine: Fine is the grade given to Three-Cent Nickels that were circulated for a time, but put into safekeeping before they could be too heavily damaged. You will notice light scratching across both the obverse and reverse sides, consistent with coins that have exchanged hands many hundreds of times.

Good: Good is the worst grade a Three-Cent Nickel can receive, and is also the grade given to those coins that have been extremely heavily circulated. These coins will have exchanged hands so many times that their raised imagery and lettering might be almost completely smoothed away. You will also notice plenty of scratching and chipping.

In order to determine the price of an 1889 Three-Cent Nickel, you realistically do not have to look much further than the coin’s grade and/or condition. When it comes to coins as old as this, even the most minor differences in grade/condition can mean for massive differences in value. Below is a chart aimed at giving you a better idea as to what the value of a graded 1889 Three-Cent Nickel is.