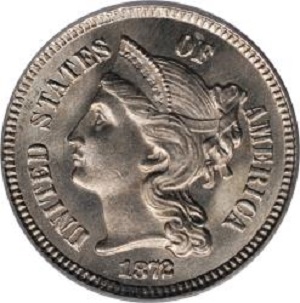 As far as iconic US coins are concerned, the Three-Cent Nickel fits that bill fairly well. Not only do three cent coins no longer exist, this particular coin was only made for a short period of time. Nowadays, serious collectors will do anything to get their hands on these coins. With an ever decreasing number of these pieces on the market today, there has never been a better time than now to get your hands on one.

The obverse side of the 1872 Three-Cent Nickel boasts the image of Lady Liberty, looking leftward. The Lady appears to be depicted in regal fashion, sporting a serious look on her face. Surrounding he obverse’s central image is a raised inscription which reads “United States of America.” Beneath the central image is an inscription which marks the 1872 year of minting. Finally, it must be noted that the edges on both the obverse and reverse outer edges are reeded.

Uncirculated: A coin that is determined to be of Uncirculated grade is one that never spent any time on the open market. These coins were kept in safekeeping from the moment they were minted and somehow managed to avoid any and all damage typically associated with coins from the 1870s and earlier.

Extremely Fine: An 1872 Three-Cent Nickel that has been determined to be of Extremely Fine grade is one that probably was never circulated, but is not perfectly pristine. There will be a minor flaw or two, however these flaws will hardly be noticeable to the naked eye.

Fine: A Fine 1872 Three-Cent Nickel is one that was likely circulated for an extended period of time, but taken out of circulation before too much irreversible damage could have been done. On the faces of these coins you will notice consistent, light scratching that has come about due to its having changed hands hundreds of thousands of times. Other than that, all of the raised imagery will be intact and clearly visible with the naked eye.

Good: Good is the lowest grade a Three-Cent Nickel can receive, and is indicative of one that was circulated extensively. As a result of this, the surfaces of this coin will be heavily damaged. On occasion, the damage will be so severe that some of the raised aspects of the piece will have been smoothed away, almost entirely.