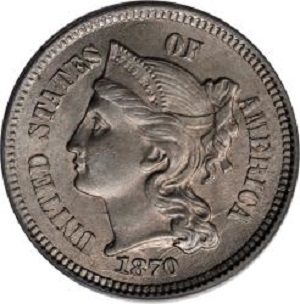 The Three-Cent Nickel is one of the most unique coins that have ever been produced by the US Mint. Not only is their denomination one that existed for barely 20 years, the coin itself was produced so long ago that it is becoming increasingly difficult to get your hands on one. As such, there has never been a better time than now to purchase a Three-Cent Nickel.

As for the coin’s appearance, the obverse side is dominated by the image of Lady Liberty, just one of the many times she was featured on a US coin. Surrounding the central image is a raised inscription which reads “United States of America.” Beneath the image will be a raised indication of the 1870 year of minting. Finally, it must be mentioned that the outer edges of both sides of the Three-Cent Nickel are reeded.

On the reverse side of the coin, one of the only features is the three-cent face value that is positioned in the middle of the face. An interesting aspect of the face value is that it is marked by Roman Numerals. Finally, the central face value is surrounded by an ornate wreath, which is depicted in great detail.

Collectors seeking out the 1870 Three-Cent Nickel will only seek out those coins that have been well-preserved throughout the years. In order to determine this, they will only purchase coins that have been professionally graded. As such, we outline the different coin grades as well as what they might mean for the 1870 Three-Cent Nickel’s appearance below.

Uncirculated: If a Three-Cent Nickel is determined to be of Uncirculated grade, this means that the piece never made it out onto the open market. Since the very first day it was minted, these pristine coins were more than likely kept in a safe place where they avoided any and all damage typically associated with coins so old.

Extremely Fine: An 1870 Three-Cent Nickel that is graded as being Extremely Fine is one that was probably never circulated, but still has a few signs of damage. From a single scratch or chip, to any other small blemish you can think of, the damage that is present will be hardly noticeable at first glance. In fact, it is typically only uncovered during the grading process.

Fine: A Three-Cent Nickel determined to be of Fine grade is one that was circulated, but not so heavily damaged. Though you will be able to identify light scratching and other signs of wear, none of the raised aspects of the coin will have been compromised. All in all, these coins have survived the years quite well.

Good: Good is the worst grade a coin can receive. This is the grade that has been assigned to coins that were heavily circulated and, as a result, heavily damaged. The age of these coins coupled with the wear means that some of the raised aspects might have been completely worn away over the years.

When it comes to assigning a value to the 1870 Three-Cent Nickel, you need not look much further than the condition. Because these coins are so old, the smallest differences in condition can make a major difference in price. The chart below will help you understand what a Three-Cent Nickel might cost given its grade.