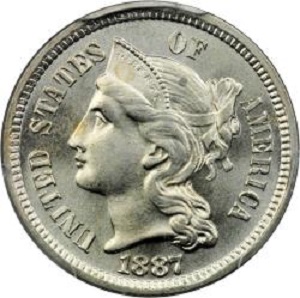 Collectors absolutely love US coins, and there are plenty of them to love. In most cases, the more obscure a coin is the more valuable it will be. This holds true perfectly for the 1887 Three-Cent Nickel as it is one of the most sought after coins that exist. With the quantity of these coins decreasing all the time, there has never been a better time than now to get your hands on one.

On the coin’s obverse, the center part of the coin is dominated by a large, detailed image of Lady Liberty. Though Lady Liberty does not exactly resemble the Statue of Liberty, the figure looks just as regal and stoic. Surrounding the image of Lady Liberty is an inscription which reads “United States of America.” Underneath the central image is a marking indicating the 1887 year of minting. Something worth noting is that on both the obverse and reverse sides of the coin, the outer edges are reeeded.

For collectors, the condition of the 1887 Three-Cent Nickel means absolutely everything. Even though these coins are very old, collectors still strive to get their hands on the most well-preserved pieces. As such, only graded coins will catch the eye of collectors. The following outline will explain the different coin grades as well as what those grades mean for the condition of the 1887 Three-Cent Nickel.

Uncirculated: If a Three-Cent Nickel is determined to be of Uncirculated grade, this means that it never spent any time at all exchanging hands on the open market. As such, the coin’s condition today will be no different from the day it was minted. The only flaw you might notice is that the coloration of the coin might have faded a bit due to its age.

Extremely Fine: A coin that is determined to be of Extremely Fine grade, this means that it is perfectly pristine save for a minor flaw or two. In most cases, the flaws you will notice (or that will be noticed by the grader) are as minor as a single scratch or chip. All in all, these coins are in excellent condition.

Fine: Fine is the grade reserved for coins that have been circulated extensively, but have not been too heavily damaged. Yes, you will notice some consistent, light scratching, but none of the raised imagery nor lettering will be too heavily damaged.

Good: Good is the grade given to coins that have been heavily circulated and damaged. There will be intense scratching, chipping, and smoothing to the point that some of the raised aspects of the coin will have been worn away entirely. These coins may be heavily damaged, but are still sought after by collectors of all types.

In order to determine a price for the 1887 Three-Cent Nickel, you really needn’t look much further than its condition. Sure, most of these coins will be damaged/worn to some degree, but you must also understand that even the most minor differences in condition can mean for massive differences in price. Below is a chart aimed at giving you a better idea of what you might be asked to pay for one of these coins given its grade.