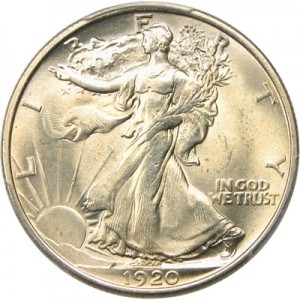 The Walking Liberty design is one that very few coin collectors will fail to recognize, heralded as one of the best designs to ever grace a US coin. The evocative image of Lady Liberty seemingly gliding across a sunrise landscape is something that is near and dear to every American’s heart. In addition to the coin’s design, the timing of this particular coin’s minting makes it especially valuable. First minted in 1916 and minted up until 1947, this coin was around during some of the most iconic periods of American history.

Nowadays, collectors are constantly striving to get their hands on these coins, though fewer and fewer of them exist with each passing year. This is something that is only going to grow truer as time moves forward.

What You Will Pay for a Walking Liberty Half Dollar

Determining the price you might be asked to pay for a Walking Liberty Half Dollar is no more difficult than taking into consideration a few different factors. First and foremost, collectors will closely analyze the surfaces of a Half Dollar, looking to spot even the smallest imperfections. As you might expect, those coins that have been extremely well-preserved over the course of their 50+ year existence are the ones that will sell for the highest prices.

The range of prices the Walking Liberty Half Dollar falls under can range from as little as $10 to many thousands of dollars. While condition plays some role in determining the price of a Walking Liberty, the year in which the coin was minted and the type of coin it is also help determine a price. It is important to keep in mind that there were up to 3 different types of Walking Liberties produced every year, so while one Walking Liberty type from a given year will sell for x-price, another type of the same year’s coin may sell for double or even triple that price. When it comes down to it, the price you are going to be asked to pay can vary quite dramatically.

The Most Sought After Walking Liberty Half Dollars

To put it simply, the most sought after Walking Liberty Half Dollars are those that were produced first. The coins from the 1910s and 1920s take precedence simply because they are older and naturally a bit more difficult to come across. When you are referencing these older coins, it is important to point out that the absolute most sought after versions of these coins are the well-preserved ones. This is so because it is amazing for a collector to have a 90+ year old coin that looks as though it was just recently minted.

Beyond that, you will find that, generally, the most sought after pieces are those that have had their condition preserved. These coins were heavily circulated and you will find that most have been pretty beaten up through years of changing hands. For someone to say they have a coin that is will over 50 years old yet still in perfect condition, that is something that is truly remarkable.

When it comes to coins as old as the Walking Liberty Half Dollar, there is no real way to determine how much one of these coins will cost ten years in the future. What we can know, however, is that these coins will only grow scarcer as time moves forward. As the scarcity grows, so too will the asking price. Though it may be tough to determine an exact dollar amount for a given coin, we can determine that the average asking price for a Walking Liberty Half Dollar is something that is only going to increase.