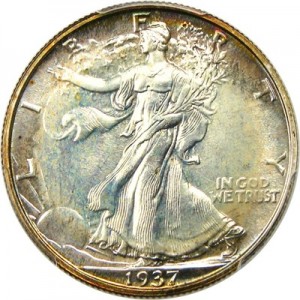 The Walking Liberty Half Dollar was first introduced to the US exchange market shortly after the turn of the 20th century, but the coin has remained relevant ever since. Even though it is still no longer being produced, collectors flock to this fine coin in order to get their hands on a great piece of US coinage history.

Of course, when it comes to collectors, only the finest, most well-preserved pieces will do, and with coins that are going on one hundred years old it goes without saying that finding them in excellent condition is no simple feat.

Grading the 1937 Walking Liberty Half Dollar

For a coin as old as the 1937 Walking Liberty, the first thing any collector will concern him or herself with is the condition the coin is in. Being that these pieces have had ample opportunities to become damaged and worn, it makes sense that a prospective collector will pour over the coin’s surfaces looking to address even the most minor imperfections.

Normally, a coin is sent away for grading in order to have its condition officially judged, but we understand that not everyone has the time and money to complete this process, and for that reason we have provided below a chart outlining the most popular coin grades along with their related characteristics.

Uncirculated: A coin that is graded as being Uncirculated will take on the appearance of a coin that has just been minted. These coins will show absolutely no signs of wear and tear and will be quite attractive and pleasing to look at. All in all, it is safe to say that Uncirculated Walking Liberties are some of the most sought after by collectors.

Extremely Fine: This is the grade given to coins that only spent a very short period of time being traded. These coins will be host to some extremely light scratching of the faces, but that scratching will most often only be able to be noticed under close inspection. In the eyes of collectors, these too are great additions to any collection.

Fine: A coin given the grade of Fine is one that will show its age, but is not so heavily damaged that the imagery and texture of the coin has been compromised. Most often, the biggest sign of wear on these pieces will be found in the partial smoothing of the raised aspects of the coin thanks to years of exchanging hands.

Good: Good is the grade given to most Walking Liberties simply because they have been so heavily circulated. These coins will be heavily damaged and, sometimes, that damage will have compromised some of the imagery and inscriptions on the surface of the coin.

When it comes to the 1937 Walking Liberty, assigning a price is no difficult task. By simply assessing the coins type and condition, you will be able to more accurately determine just how much you might be asked to pay for one. Being that multiple types of this coin were minted every year, the exact type can go a far way in predicting an average asking price. Secondly, collectors are always concerned with condition, so a well-preserved piece is almost always going to sell for more than a piece that has been damaged. Below is a chart that aims at giving you a better idea of what you can expect to pay for a Walking Liberty given its condition and type.