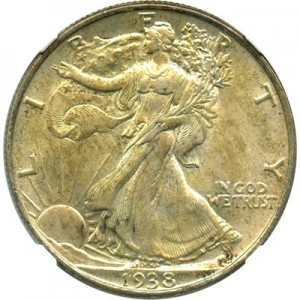 With its beautiful, intricate design, it is no wonder that the Walking Liberty Half Dollar was an instantaneous hit when it was made public all the way back in the early 20th century. Not only was the coin entirely new, its design was nothing like had ever been seen before. These coins have since had their production halted, but their popularity remains high thanks to collectors everywhere trying to get their hands on them.

Unfortunately, collectors are looking for these coins to have been preserved in excellent condition, and that is something that doesn’t happen so easily.

Grading the 1938 Walking Liberty Half Dollar

Being that these Half Dollars were so large, they had ample opportunity to become damaged over the years. For collectors nowadays, the first goal when dealing with these coins is to determine the extent of damage that the coin in question has been subjected to. In most cases, the damage is fairly heavy, but there are still plenty of well-preserved pieces out there.

Under normal circumstances, someone who is wondering about the condition of a given coin will send that coin away for grading. Understanding that this is not always an option, we have provided below a listing of the different popular coin grades as well as their characteristics.

Uncirculated: If a coin is graded as being Uncirculated, this means that it has been subjected to almost no wear and looks as though it were just minted. Retaining a nice shine and all of the original texture, these coins are more likely to be minted a few weeks ago as opposed to nearly a century ago. For collectors, this grade is the most desirable.

Extremely Fine: If a coin is graded as being Extremely Fine, this means that it has been circulated, but only for a very short period of time. These coins will have only a small, light amount of scratching present on the surfaces, and apart from that will be in absolutely excellent condition. These are also highly sought after by collectors.

Fine: If a coin is graded as being Fine, this means that it was circulated for a moderate period of time. During its time in circulation, the piece will have been subjected to a good amount of wear and tear, but not wear and tear significant enough to compromise the inscriptions and texture of the coin. Most often, some of the texture will have been worn away, but will for the most part remain intact.

Good: A coin deserving of a Good grade is one that spent its entire life in circulation. These coins are quite honestly in fairly rough shape and have big damage marks such as chips and bends. Still, for someone who is looking to put together a complete collection, a purchase of this coin is by no means a bad decision.

Pricing the 1938 Walking Liberty Half Dollar