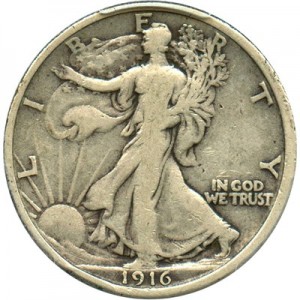 The US Mint has experimented with many coins throughout its history, but few are more iconic than the Walking Liberty Half Dollar. These coins were first introduced during the first stages of the 20th century and were revolutionary because they offered an entirely new denomination of money with which citizens could deal with.

Though these coins have since had their production halted, they are still very popular amongst collectors. Being that they are so old, however, very few exist in excellent condition and that number is only going to lessen as time moves forward.

Grading the 1916 Walking Liberty Half Dollar

For collectors, the goal is always to find those coins that have been well-preserved over the years. This is not always easy, and is especially difficult when it comes to a coin from 1916. For most people, the most obvious option is to have the coin or coins sent away for grading. We understand that not everyone has the time and money to do this, so we have provided below a listing of the different coin grades and their associated characteristics.

Uncirculated: As the name of the grade implies, an Uncirculated coin is one that has not spent any time at all on the open exchange market. These coins will appear to be mostly pristine and have retained much of their original shine and texture. As you could have guessed, these are the most popular of all Liberty Half Dollars and are the most sought after by collectors.

Extremely Fine: An Extremely Fine coin is one that spent only an extremely limited amount of time in circulation. These coins will show some light damage, but for the most part will appear to be well-preserved. Most often, the damage and wear on the coin is only able to be seen under close, careful inspection.

Fine: If the coin in question is graded as being Fine, this means that it underwent a good bit of time in circulation and was damaged to some extent during that time. These coins will play host to light scratching all over the faces while some other, more noticeable damage may be able to be made out as well.

Good: Good is the lowest possible grade available and is one that is typically reserved for those coins that have been circulated for an incredibly extended period of time. These coins will show plenty of surface wear, so much so that the texture of the coin will have been smoothed. Not the most desirable of all the coins, people are still willing to pay a pretty penny for a Liberty Half Dollar in this condition.

Pricing the 1916 Walking Liberty Half Dollar

In order to determine an accurate price for the Liberty Half Dollar, you must consider a few factors before jumping to any conclusions. For one, because there were multiple types of the coin minted every year, the exact type and associated scarcity will play into the price heavily. Secondly, the condition of the coin means everything and is always going to play into the price. Below is a chart aimed at giving you a better idea of what you might expect to pay for a 1916 Walking Liberty Half Dollar given its condition and type.