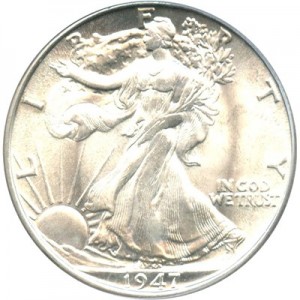 The Walking Liberty Half Dollar is a masterpiece that was first introduced by the US Mint during the early stages of the 20th century. The coin was produced up until after World War II, at which point it became a collector’s item for all. Nowadays, these coins are still extremely popular amongst collectors, but are only becoming increasingly difficult to find.

Grading the 1947 Walking Liberty Half Dollar

The Walking Liberty Half Dollar, being produced more than 50 years ago, is a coin that has been subjected to any number of different bits of damage. Whether it be wear and tear from years of circulation or other, unforeseen types of damage, these coins have been through a lot.

Uncirculated: A coin determined as being Uncirculated is one that did not spend any time at all on the open exchange market. Instead, these coins were kept in safekeeping and out of harm’s way. For collectors, these are the most desirable pieces due to the fact that they have been so well-preserved. Unfortunately, this also often means that these coins are the most expensive as well.

Extremely Fine: A coin that is determined to be of Extremely Fine grade is one that spent almost no time at all on the open market. Though you may be able to make out light signs of wear, the coins will, for the most part, appear to be pristine. These coins are also quite the acquisition for any and all collectors.

Fine: Fine is a middle of the road grade given to coins that have been damaged due to circulation, but not so heavily damaged that the surfaces of the coin are completely taken away from. Though the raised aspects of the coin may have been smoothed a bit due to the exchanging of hands over the years, the rest of the coin’s imagery and texture will be for the most part intact.

Good: Good is the worst grade a coin can receive and is often indicative of a piece that has been very heavily damaged. These coins will show anything from deep scratching to the actual bending of the coin itself. All in all, these pieces have seen their better days and are not the most attractive from an aesthetic point of view.

Pricing the 1947 Walking Liberty Half Dollar

When it comes to determining a price for the 1947 Walking Liberty Half Dollar, there are a few different factors you have to take into consideration. For one, because there were multiple editions of this coin produced every year, the exact type of coin you have will play into the asking price. Secondly, because collectors are so concerned with a coin’s condition, this will also play heavily in determining an asking price. Below is a chart aimed at giving you a better idea of what you might be asked to pay for a 1947 Walking Liberty given its condition and type.