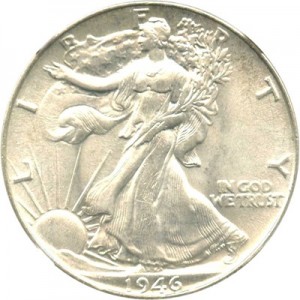 As far as US coins are concerned, few have been able to replicate the beautiful design found on the obverse and reverse sides of the Walking Liberty Half Dollar. Though these pieces have not been in production for more than 50 years, they remain popular today amongst collectors. For collectors, however, the goal is always to find one of these pieces in well-preserved condition.

Unfortunately, because of how old these coins actually are, finding one of them in well-preserved condition is by no means an easy task. With that said, there are still plenty of attractive pieces out there today, but that number is constantly being diminished.

Grading the 1946 Walking Liberty Half Dollar

If you are talking about a coin that is more than a half century old, then you know that the condition of said coin is never guaranteed. While one piece may have been able to withstand the test of time, another piece may have suffered a lot of damage during that same expanse of time. This is why when collectors go to make a purchase of one of these coins, they are very careful about closely analyzing any and all imperfections.

Another way to do this is to have a coin graded, but not everyone has the time and money to do this. For that reason, we have provided below a listing of the different popular coin grades along with their characteristics.

Uncirculated: A coin determined to be Uncirculated is one that spent no time at all changing hands. These coins have been extremely well-preserved over the years and will take on the appearance of a coin that has just been minted. All in all, these are the number one desired coin for collectors, but also some of the most expensive.

Extremely Fine: If a coin is determined to be of Extremely Fine grade, this means that it has been in circulation, but only for a limited period of time. These coins will play host to some light scratching and other mild signs of wear, but for the most part will appear to be pristine.

Fine: If the coin in question is receiving of a Fine grade, this means that it has been circulated quite heavily, but hasn’t been too heavily damaged during that time. You will notice light scratching on the surfaces of these coins, and the overall texture will have been smoothed out thanks to the changing of hands over the years.

Good: Good is the lowest grade a coin can receive and is usually given to those pieces that have been very heavily damaged over the years. These coins will show ample signs of wear, so much so that at times it may be physically impossible to make out the coin’s inscriptions and imagery with the naked eye. Though often inexpensive, these coins are the least desirable for most collectors.

Pricing the 1946 Walking Liberty Half Dollar

In order to price a coin that is as old as the Walking Liberty Half Dollar, you must look no further than the condition of the coin and the coin’s type. Because multiple types of this coin were minted every year, the scarcity associated with that particular coin type will assuredly play into the asking price. Secondly, the condition of the coin means everything to collectors, so those coins that have been well-preserved are the ones that will sell for the highest price tags. Below is a chart aimed at giving you a better idea of what you might be asked to pay for one of these coins given their type and condition.