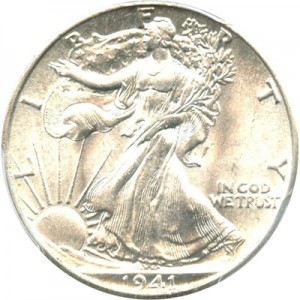 The Walking Liberty, with its larger size and equally large denomination, was a hit the second it hit US markets during the early parts of the 20th century. Though these coins have since had their production ceased, coin collectors from the US and abroad flock to them for their collectible value.

Of course, for any collector, the goal is to find a coin that has been preserved and remains in good shape. Being that these pre-WWII coins are so old, finding them in such a state is no simple feat. With that said, however, there still exists plenty of well-preserved pieces for sale.

Grading the 1941 Walking Liberty Half Dollar

For collectors, the condition of a coin is the top priority because no one desires to put together a collection of rough, ragged coins. When it comes to the 1941 Walking Liberty, the coin’s age means that collectors are always going to be critical of the condition it is in. This is why collectors pour over the surfaces of a coin prior to ever making a purchase.

For many, the easiest way to determine the condition of a coin is to have that coin sent away for grading. Knowing that not everyone can afford to have this process completed, we have provided below an outline of the most popular and commonly found coin grades.

Uncirculated: A coin that is determined to have been Uncirculated is one that never spent any time exchanging hands. These Walking Liberties will have had all of their imagery and texture well-preserved such that the coin looks as though it were just recently minted. These are the most desirable of all Walking Liberties, but also some of the most expensive.

Extremely Fine: If a coin receives an Extremely Fine grade, this means that it has been circulated, but only for a short period of time. These coins will take on the appearance of a coin that has never been damaged, but upon closer inspection you will see that some of the surfaces are marred with light scratching. Still, at the end of the day, these coins are a great addition to any collection.

Fine: Fine is a middle of the road grade given to coins that have been worn down during the changing of hands, but have not been so heavily damaged that their imagery and texture is no more. All in all, the most noticeable wear will be the smoothing of the coin’s surfaces.

Good: Good is the lowest grade available for a coin. These pieces will have been quite heavily circulated and will show that immediately. The surfaces of the coin will be smooth to the touch and much of the imagery may be damaged to some extent. Though not the most attractive pieces, these are far and away the most affordable more often than not.

Pricing the 1941 Walking Liberty Half Dollar

As is the case with most coins from this era, determining a price is no more difficult than paying attention to the type and condition of the coin. The coin’s type is important because multiple types of Walking Liberties were minted every year, and the scarcity associated with that specific type will play into the asking price. Secondly, the overall condition of the coin will also help determine an appropriate asking price. Below exists a chart aimed at giving you a better idea of what you might be asked to pay for one of these coins given the coin’s condition and type.