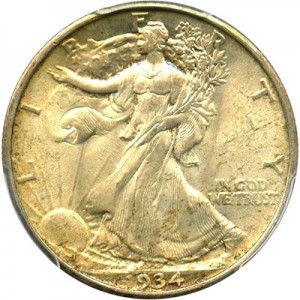 The US Mint has been operating continuously since shortly after the United States was founded as a country. Though it has expanded beyond its original Philadelphia location, the mint has stuck to its roots by producing brilliant coinage for both the United States as well as other countries around the world.

One of the finest coins ever produced by the US Mint is the Walking Liberty Half Dollar, which was first thought of and designed during the first stages of the 20th century. These coins are no longer being produced today, but they have a special place in the heart of collectors both at home and abroad.

Grading the 1934 Walking Liberty Half Dollar

Being that not every collector is a coin expert, most prefer to have their coins sent away for grading so that a professional can determine the exact condition of the coin. This is an expensive process, so we have provided below a basic outline of the different characteristics associated with coins of certain grades.

Uncirculated: A coin that is graded as being Uncirculated is one that never spent any time being exchanged on the open market. Instead, these pieces were immediately put into safekeeping after being minted. Thanks to this, they have retained their original shine and texture, and are some of the most popular coins in the eyes of collectors.

Extremely Fine: A coin that is graded as being Extremely Fine is one that spent almost no time at all exchanging hands. These coins will have only very minimal signs of wear and tear that will most often consist of light scratching. All in all, collectors love these coins because they are in great condition and are not as pricy as their Uncirculated counterparts.

Fine: A coin that is graded as being Fine is one that was circulated for a good bit of time, but did not incur any major damage during that time. All in all, these coins are in decent shape and apart from scratching on both sides of the coin and the wearing away of the coin’s texture, they are in fairly well-preserved condition.

Good: Good is the worst grade a coin can receive and is indicative of a piece that has been quite heavily circulated over the years. These coins will be complete with a host of damage including chipping and bending. All in all, their poor condition drives collectors away, but the affordable price makes these coins almost irresistible at times.

Pricing the 1934 Walking Liberty Half Dollar

When it comes to determining a price for coins that are nearly 100 years old, there are a few different factors that you absolutely must consider. For one, the fact that there were multiple types of Walking Liberty Half Dollars produced every year means that the type you own will undoubtedly play into the price you pay. Secondly, collectors obsess over condition, so it goes without saying that coins that have been well-preserved will sell for higher prices than coins that have been neglected. Below is a chart aimed at giving you a better idea of what you can expect to pay for a 1934 Walking Liberty given its condition and type.