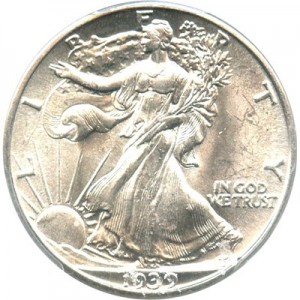 The Walking Liberty Half Dollar was an instant success when it was introduced in 1916, but remains popular today due to high collector interest. Though the production of these coins was ceased before the halfway point of the 20th century, demand for them remains high as ever and only seems to intensify with each passing year.

Knowing that the supply of these coins is only diminishing, collectors do everything in their power to hunt down pieces that have been well-preserved. Of course, this is something that is much more easily said than done.

Grading the 1939 Walking Liberty Half Dollar

Because the 1939 Walking Liberty was minted so long ago, any prospective buyer is almost always going to immediately assess the coin’s overall condition. After decades of circulation, it goes without saying that these coins have been subjected to a lot of damage, but some much more than others.

For most people, the way to have a coin’s condition judged is to send it away for grading at the hands of a professional organization. Realizing that not everyone has the time and money to send their coins away for grading, we have provided below an outline of the major coin grades as well as their associated characteristics.

Uncirculated: If your Walking Liberty is determined to be Uncirculated, this means that it never spent any time being used to pay off debts or pay for goods. Instead, these well-preserved pieces will look little different from what they did the day they were minted. As you might have guessed, these are the coins most heavily sought after by collectors.

Extremely Fine: A coin that is graded as being Extremely Fine is one that spent some time in circulation, but was taken out before a lot of damage could be recorded. These coins will be in mostly perfect shape, but some light scratching and other small signs of imperfections will be impossible to not notice.

Fine: Fine is a middle of the road grade that is basically saying that the coin in question is not too heavily damaged, but was circulated for an extended period of time. These coins will play host to the smoothing of surfaces and some consistently light scratching. All in all, they are a great addition to any new or existing collection.

Good: If the coin in question is graded as being Good, this means that is in pretty rough shape. These coins will have had their surfaces almost completely smoothed, and there will be plenty of scratching and chipping beyond that. For someone who is looking to complete a full collection, this may be the most affordable way in which to do so.

Pricing the 1939 Walking Liberty Half Dollar

For a coin like the Walking Liberty Half Dollar, the best way to determine price is to take into consideration a few different factors. For one, because there were multiple types of this coin minted every year, the exact type of coin and its related scarcity will very heavily play into the price you pay. Secondly, condition means everything when it comes to these coins so it goes without saying that the condition the coin is in will also directly influence the asking price. Below is a chart aimed at giving you a better idea of what you can expect to pay for one of these coins given its condition and type.