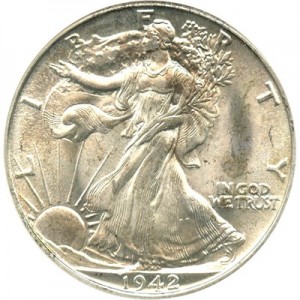 The Walking Liberty Half Dollar is a fine piece of US coinage that emanates from the early 20th century. These coins were very popular during their time in production, but have since been taken off the production lines. Nowadays, these pieces are extremely popular amongst collectors and are being bought up with extreme regularity.

These coins are quite old, but collectors are still attempting to find them in excellent condition. Though it may seem difficult to believe, there are still plenty of well-preserved pieces available for purchase. Finding these coins, however, is no easy task.

Grading the 1942 Walking Liberty Half Dollar

If you are talking about a coin that was produced more than half a century ago, you will most likely be talking about coins that have been quite heavily circulated. When it comes to the 1942 Walking Liberty, the cold, hard reality is that most of these pieces saw plenty of time on the open exchange market. For this reason, collectors are especially skeptical of the condition of these coins before they execute a purchase.

Normally, it is preferred to have coins this old sent away for grading, but that is not an option for everyone. Understanding this, we have provided below an outline of the popular coin grades as they relate to the Walking Liberty Half Dollar.

Uncirculated: If you have in your possession an Uncirculated Walking Liberty, this means that you are in possession of a coin that spent no time at all in circulation. Thanks to this, the coin’s imagery and texture will have been completely and entirely preserved and free from damage. As you might expect, Uncirculated coins are the most desirable in the eyes of collectors.

Extremely Fine: If a coin receives an Extremely Fine grade, this means that the piece in question has only been circulated for a very short period of time. These coins will appear to be pristine at first, but if you look closely at the Walking Liberty and Eagle, you will be able to notice some light but consistent scratching. Apart from that, however, these coins will be in very good condition.

Fine: A coin receiving this grade will be one that spent an extended period of time in circulation but did not incur an exorbitant amount of damage during that time. The surfaces of these coins will have been smoothed to some extent thanks to the changing of hands, but all imagery and inscriptions will still be able to be made out.

Good: This is the lowest grade a coin can receive and is typically indicative of a coin that spent its entire life in circulation and was just recently taken out. Thanks to their extended stay in circulation, these coins will have incurred a lot of damage, some of which may have compromised the imagery/inscriptions on the coin’s faces.

Pricing the 1942 Walking Liberty Half Dollar

Determining a price for the Walking Liberty is not such a difficult task so long as you take two factors into consideration. First, because there were multiple types of these coins minted every year, the exact type you own and its related scarcity will undoubtedly play into the coin’s asking price. Secondly, the coin’s condition will play a direct role in laying out how much you might be as ked to pay. Below is a chart aimed at giving you a better idea of what you can expect to pay for a Walking Liberty given its type and condition.