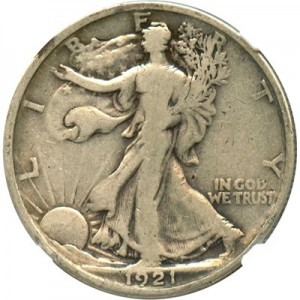 The US Mint is one of the world’s top mints and has risen to these ranks through a more than 200 year history. Apart from minting the currency of the United States, the US Mint has also been tasked with producing the coinage of countries from all over the world. All in all, the US Mint and its products have garnered quite the positive reputation around the world, and that is only getting better with each passing year.

One of the top coins ever produced by the US Mint is the Walking Liberty Half Dollar, which was first introduced during the early parts of the 20th century. These coins have since had their production halted, but they are extremely popular in the eyes of collectors.

Grading the 1921 Walking Liberty Half Dollar

For coins from the 1920s or earlier, the condition of the coin is always the subject of skepticism for collectors. These coins have had ample opportunity to become damaged and worn, and for that reason you will see collectors paying very close attention to the overall condition the coin is in.

Some collectors prefer to send their coins away for grading, but we understand that not everyone has the financial capabilities to do this. That is why we have provided below a listing of the different popular coin grades as well as their associated characteristics.

Uncirculated: This is the highest coin grade that exists and is used to describe coins that have been kept out of harms way since the day they were minted. Having not been damaged in the slightest, these coins appear to have been just minted. Naturally, collectors are willing to pay top-dollar for coins that are in such superb condition.

Extremely Fine: Extremely Fine is the coin grade reserved for coins that spent time in circulation, but that time was limited. These coins will show almost no signs of wear whatsoever and will appear to be pristine. Under closer inspection, however, you will notice that there is some extremely light wear able to be made out.

Fine: Fine is the grade given to coins that were exchanged for a longer period of time. These coins have had ample opportunity to become damaged, but the damage you will notice will be light in nature. All in all, these are perfect to add to any collection, but they are not in the best condition.

Good: If a coin is graded as being Good, you will notice that it is in fairly rough shape. These coins will play host to a whole lot of damage ranging from heavy chipping to even the bending of the coin. Though not in the best condition, some of these coins still fetch a fairly hefty price tag thanks to their being so rare.

Pricing the 1921 Walking Liberty Half Dollar

When it comes to attempting to purchase a 1921 Walking Liberty Half Dollar, the best way to figure out how much you might be asked to pay is by paying attention to a few facets of the coin. For one, because there were multiple types of this coin made every year, the exact type you have will play into the asking price. Secondly, condition is everything for the average collector, so it goes without saying that the better condition the coin is in the higher the asking price will be. Utilize the chart below to gain a better idea of what you might be asked to pay for one of these coins if you are given its condition and type.