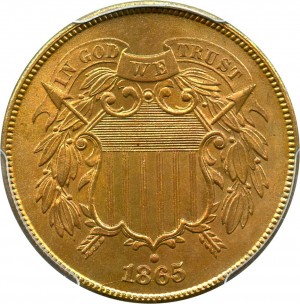 The Two Cent coin was produced by the United States Mint from 1864 to 1873. While the coin was used primarily for circulation purposes, mint year 1873 was produced with collectors in mind.

The most common date found for the Two Cent piece is 1864. This was the coin’s first year of mintage and the U.S. Mint produced over 20 million of these coins. There were two distinct varieties produced, however, the large motto and the small motto.

The small motto is the less common of the two types, and one of these coins can potentially fetch $200 or more depending on its condition. An 1864 small motto Two Cent coin in extremely fine condition can fetch nearly $600 or more.

As far as coins go, the Two Cent coin was produced for only a limited amount of time. While not extremely difficult to find, some rarer varieties of this coin do exist. Interestingly, the premiums attached to these coins do not seem to reflect their somewhat limited supply perhaps due to the fact that they may not be as popular as other types of coins. The values of two cent coins can range significantly, from $11 to over $200 depending on year and condition. If you own a two cent coin that is in great condition from a year that is desired by dealers and collectors, you may potentially benefit from having your Two Cent coin graded by a professional coin grading company.

Condition can mean the difference between a coin that is worth $11 and a coin that is worth $500. You can get a good idea of how your coin might be graded by taking a close look at some of the coin’s details. One easy trick is to examine the coin’s text. The motto “IN GOD WE TRUST” can provide some great clues about the coin’s condition. If the coin has any letters, for example, that are not easily seen or have been eroded; the coin may be in good condition.

If the coin has all letters present and readable but has some slight wear, the coin may be considered to be in fine condition. A coin that has all letters present and easily discernible that has maintained a crisp and clean surface might be given a grade of extremely fine. One can also look at other details on the coin’s surface such as the ribbon for any signs of wear and tear.

Coins that have been through the grading process by a professionally recognized grading company such as PCGS or NGC may garner higher premiums because their condition and authenticity have been verified.

The rarer of the two varieties, the 1864 Two Cent coin with small motto has been desired by collectors for some time now.

Determining the motto size can be a little challenging, however. The small motto features lettering that is not very bold with significant spacing between the letters.

The large motto, on the other hand, features lettering that is considerably bolder with tighter spacing between individual letters.

These seemingly small details can mean the difference between a two cent coin worth $11 or $12 and one that is worth several hundred dollars or more. Make sure you examine your coin to determine what size motto you have before looking to sell or value the coin.

While the Two Cent coin may not be the most popular among collectors, serious collectors will not hesitate to pony up for coins they desire in their collections. The values for these coins are considered to be stable and they may potentially see increasing appreciation in value over the years as they age further.