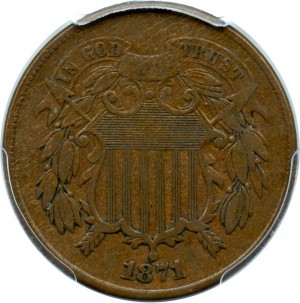 The two-cent piece is one of the more intriguing coins to have ever emerged from the US Mint. While its face value is interesting in and of itself, the fact that it was only produced for ten years means that there have only been a few coins that have survived the years. Nowadays, collectors and historians alike seek this coin out due to its undeniable collectability but also due to its historical significance. The coin’s time being produced almost directly coincides with the end of the Civil War, and that is a very big deal.

Collectors are constantly striving to get their hands on the coins that have survived the years in great condition, however there are not very many of these coins that fit that bill. As such, people are willing to pay top-dollar for coins that have even only been marginally well-preserved.

As for what the coin looks like, its design is quite simple. The obverse side of the coin is dominated in the center by the US Seal. Above the Seal is a waving banner that has raised lettering which reads “In God We Trust.” Below the Seal you will find the 1871 year of minting. As for the reverse side, there is a wheat wreath that features the 2-cent face value in the middle. Arching overtop of the wreath are the words “United States of America.”

When it comes to determining the nominal value of an 1871 two-cent piece, this is something that heavily depends on the condition. This is why collectors will only purchase coins that have been graded. Below you will find the different specs associated with 1871 two-cent pieces and their associated grades.

Uncirculated: An Uncirculated 1871 two-cent piece is one that never spent any time exchanging hands. As such, these coins have been kept in perfect condition and feel today like they did the second they emerged from the mint more than 100 years ago. The coloring of the coin might be a bit off due to its age, but other than that the coin will look perfect.

Extremely Fine: A coin that is receiving of an Extremely Fine grade is one that might have been circulated, but only for a limited period of time. So while these coins might show some signs of wear and tear, they will hardly be able to be noticed by the naked eye.

Fine: A Fine grade is given to the middle of the road 1871 two-cent pieces which show a bit of damage but not so much that it compromises the aesthetic qualities of the piece. Though there will assuredly be some noticeable, it will not compromise any of the coin’s imagery or lettering.

Good: Good is the grade given to coins that have been heavily damaged through their years of circulation. These coins will come complete with plenty of scratching and chipping. In addition, the fact that they have changed hands so many times means that some of the raised aspects of the coin will have been smoothed.

If you would like to know how much your 1871 two-cent piece is worth, this is something that will depend heavily upon the grade it has received. The higher and better the grade, the more expensive/valuable the coin will be. The chart below should serve to gi e you a better idea as to what a graded 1871 two-cent coin will be valued at.