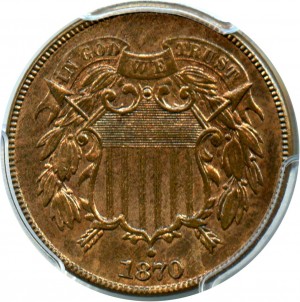 The two-cent piece is an interesting coin for no other reason than that it was produced for merely ten years. While other coins have been around for hundreds, the two-cent coin is one that has a very long history, but a very short time having been minted. Naturally, the fact that so few of these coins were ever made means that even fewer have managed to make it through the years. Beyond this, only a tiny fraction of those that survived have been preserved in good condition.

For collectors, the ultimate goal is to find a two-cent piece that has been well-preserved. Though this is, by no means, an easy task, it can be done. Though all versions of the two-cent piece are valuable in the eyes of collectors, the 1870 variety is particularly sought after due to it being one of the first coins minted after the conclusion of the Civil War.

As for what the coin looks like, the design is nothing to write home about in that it is extremely simplistic. The obverse side is dominated by the central image of the US Seal. Almost attached to the seal, but slightly above it is a banner with an inscription which reads “In God We Trust.” Below the US Seal is where you will find the 1870 year of minting. The reverse side is dominated by the image of a wheat wreath, which features the 2-cent face value. Arching over the top of the reverse side are the words “United States of America.”

When it comes to coins as old as the 1870 two-cent piece, the condition the coin is in means everything to collectors. While most of the coins are in poor condition, there are thousands of examples of coins that have been well-preserved and relatively well-preserved throughout the years. When an expert determines the condition a coin is in, this is referred to as grading. Graded coins are the only ones collectors are interested in, and the following will introduce you to different coin grades as well as what they mean.

Uncirculated: Coins that are exchanged on the open market are referred to as having been circulated, so it only follows that

Uncirculated coins are those that have never traded hands. These coins have been kept in a safe and secure location since they have been minted and will show absolutely no signs of wear and tear. Though these are the most desirable coins, they are also the most expensive.

Extremely Fine: An Extremely Fine 1870 two-cent piece will very closely resemble an Uncirculated coin form the naked eye, however under closer inspection some imperfections will surface. Though the scratches, smoothing, and chips might be almost unidentifiable, they are there and they do, most definitely, affect the coin’s value.

Fine: A coin that has been graded as Fine is one that will show a good bit of visible damage, but not so much that it takes away from the coin’s aesthetic qualities. All of the raised imagery and lettering will have been maintained. Apart from some smoothing and scratching as a result of the coin having been exchanged, the coin will appear to be in great shape.

Good: Coins that are graded as being Good will show a lot of damage. There will be significant smoothing and scratching, so much so that the some of the imagery and lettering might have been compromised. Despite this, these coins are still very much sought after by collectors.

When it comes to determining the value of an 1870 two-cent piece, this all comes down to the condition in which it is in. As you might expect, the coins that have been preserved in great condition are going to cost you more than the ones that have been beaten up and show their age. The following chart will help you determine the value of different grades of 1870 two-cent pieces.