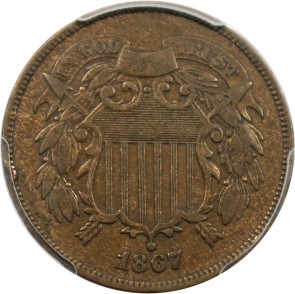 The two-cent piece is one that often flies under the radar for no other reason than the fact that it was produced for only ten years. Even though this is an example of a coin that might be foregone by a new collector, seasoned collectors will do anything to get their hands on these. Finding one of these coins is not enough for collectors, because collectors only want the coins that have been preserved throughout the years. Because there are very few well-preserved pieces remaining, it is easy to see why they do not stay on the market for very long at all before being scooped up by a collector.

The fact that the 1867 two-cent piece was produced in one of the first years following the conclusion of the Civil War, the coins are even more valuable due to their historical significance. Adding to this significance is that these coins were only made for ten years, meaning that there is only a limited quantity available.

As for the coin’s design, it is really quite simple. The coin’s obverse is dominated in the center by the US Seal, which really looks like a wreath of sorts. Above the Seal is a banner within which is a raised inscription which reads “In God We Trust.” Below the US Seal is where you will find the raised 1867 date of minting. On the coin’s reverse side is a wheat wreath that features the coin’s 2-cent face value. Above the wreath is raised lettering which reads “United States of America.”

When it comes to the condition of a coin as old as the 1867 two-cent piece, you can bet that most are fairly worn and will show their age. With that being said, there are still plenty of these coins that have withstood the test of time and are still in almost flawless condition. The actual condition of these coins is something that will be determined by an expert, via grading. In essence, a coin’s grade is nothing more than a determination of its condition derived from someone who knows what they are talking about. Below will offer a brief introduction to the different coin grades.

Uncirculated: An Uncirculated 1867 two-cent piece is one that has spent no time whatsoever on the open market. This means that from the day the coin was minted it has been well-preserved and kept from being damaged. Though its coloration might be a bit different from what it was in 1867, the raised imagery and lettering will be perfectly preserved.

Extremely Fine: An Extremely Fine coin might have spent some time in circulation, but its condition will have been mostly preserved. At first glance, it will look like these coins have no signs of visible wear and tear, however under closer inspection you will see some small blemishes and scratches. Still, these coins are extremely desirable in the eyes of collectors.

Fine: Coins that are graded as being Fine are those that spent their fair share of time in circulation and have plenty of signs of damage. The thing about the blemishes and imperfections on these coins is that they are not enough to compromise the imagery and lettering. Despite the scratches and smoothing, all of the major aspects of the coin can easily be made out with the naked eye.

Good: Coins that are graded as being in Good condition are in the worst condition. There will be plenty of signs of wear and tear including scratches, chips, and a good bit of smoothing. On some occasions, the smoothing you see will be so severe that the raised imagery will almost be indecipherable from the flat aspects of the coin’s faces.