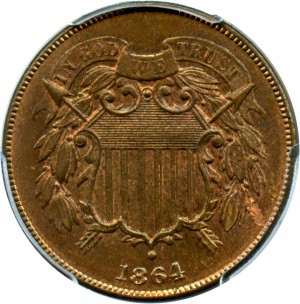 1864 was the first year during which the US two-cent coin, or two-cent piece, was produced. For collectors, this is significant primarily due to the fact that 1864 two-cent pieces are the first of these coins to have ever been produced. The idea of the two-cent coin was first thought of in the early 1800s by a Connecticut Senator.

During that period of time, the prevailing belief and custom was that all coins should be comprised of their equivalent worth in precious metals. For the two-cent piece, it was decided that the coin would be comprised of 95% copper and 5% zinc/tin. For collectors today, the value of the metal in the coin is superseded by the value collectors have placed in it. After all, these coins were only produced for 10 years, therefore there were never a large amount of them. Nowadays, the number of existent two-cent pieces is smaller than ever.

Being that collectors desire the most pristine coins around, those that have withstood the test of time effectively are going to assuredly be valued the highest. With that being said, of course, the fact that these coins have been around for more than 150 years means that the large majority of those that remain are in poor condition.

The obverse side of the 1864 two-cent piece boasts the US seal, which is topped with a banner reading “In God We Trust.” Beneath the US seal you will see the imprinted 1864 date. The reverse side of the coin is dominated in the center by a wreath made of wheat. In the center of the wreath is the 2-cent face value, while the phrase “United States of America” is arched over the top.

It must also be mentioned that, technically, there are two different types of 1864 two-cent pieces—a Large Motto and a Small Motto. The motto referenced by the name of these coins is the “In God We Trust” on the obverse side of the coin. The large motto coin will see the U in “trust” nearly touch both the bottom and top edges of the banner. Generally speaking, the letters on the small motto coin tend to be shorter and fatter while those on the large motto are taller and thinner.

When it comes to collecting the 1864 two-cent piece, collectors are concerned with the grade of the coin. The reason for this is due to the fact that a coin grade is an expert-derived determination of the coin’s condition. While the average person might be able to tell a worn coin from one that has been well-preserved, there are finer details untrained people will simply miss. That is why we call in experts to carefully pour over the surfaces of the coin, looking for even the smallest of imperfections.

The following is an outline of the different grades an 1864 two-cent piece might receive.

Uncirculated: An Uncirculated 1864 two-cent piece is one that has absolutely no signs of wear. The raised imagery and lettering will be easily deciphered from the coin’s flat surface due to the fact that the coin was never used and traded during its first years. Because the coin is so old, the coloration of the surfaces may be a bit different than what it might have been fresh off the press, but the actual surface will show no signs of wear.

Extremely Fine: An Extremely Fine two-cent piece is one that is in slightly worse shape than on Uncirculated coin. By looking at these coins with the naked eye, they will look perfect, however closer inspection will show some slight signs of wear. Whether it be a smoothing of the coin’s surface, a chip, or even a scratch, there will be some visible signs of wear.

Fine: A Fine 1864 two-cent piece is one that will show visible signs of wear from some time in circulation. The coin’s raised imagery will have begun merging with the flat surface of the coin. The same can be said of the raised numbers and letters on the coin as well. All things considered, the coin will still look to be in pretty good shape.

To make what can be a long story quite short, the simple fact of the matter is that because 1864 was the first year in which the two-cent piece was produced, it is also one of the most expensive editions. You will pay more than $1,000 for one of these coins that has been extremely well-preserved, however even the most worn coins will still cost a few hundred dollars. The chart below will help give you a better idea of what these coins are worth, given their grade.