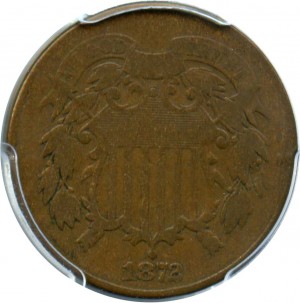 The two-cent piece is a US coin that carries a lot of historical significance as well as a lot of value as far as collectors are concerned. The coin is unlike so many others because of its somewhat short time in circulation. Produced for only 10 years, the two-cent piece is available in limited quantities. On top of that, the fact that these coins were produced so long ago means that only a select few have survived the years and made it to today.

For collectors, the absolute number one goal is to acquire these coins in the best possible condition. Unfortunately, finding well-preserved pieces is never an easy task. With that being said, however, they assuredly do exist and are being purchased and sold all the time.

As for what the two-cent piece actually looks like, the design itself is very simplistic. On the obverse side of the coin you will find the raised image of the United States Seal. Above the seal is a raised inscription which reads “In God We Trust.” The marking for the 1872 year of minting will be found on the obverse side below the US Seal. On the reverse side there will be a wheat wreath, in the center of which will be the 2-cent face value of the coin. Arching over the top will be the words “United States of America.”

As for the condition of a coin as old as the 1872, this is of the utmost importance to collectors. While you and I can look at a coin and determine whether it is in good condition or not, it is much more important to have the condition officially assessed; this is called grading, and is performed by an expert. As for the different grades, they will be discussed and explained below.

Uncirculated: An Uncirculated coin is one that, more or less, went directly from the mint to safekeeping. Being that the coin was never in circulation and has never exchanged hands, it will be in near perfect condition. The coin’s coloration might have faded over the years, but the actual physical aspects will be today exactly as they were back in 1872.

Extremely Fine: An Extremely Fine coin may only be a step down from an Uncirculated piece, but the differences might not be able to be made out with the naked eye. Under close inspection whilst being graded, these coins will show some marks and scratches. At the end of the day, these coins will still be in nearly pristine condition.

Fine: A coin that has determined to be of Fine grade is one that has a fair amount of markings and scratching,  but not so much that the physical and aesthetic qualities of the coin have been compromised. Though there are varying degrees of Fine, these coins will still look to be in decent shape.

Good: Good is the grade given to the most worn and tattered coins. When it comes to Good 1872 two-cent pieces, those that have been determined to be Good will show significant signs of wear and tear. The raised imagery and letters will have been worn down significantly, sometimes to the point that the raised aspects of the coin will have merged with the coin’s flat surfaces.

When it comes to determining the value of a coin, this is something that depends entirely on the grade the coin received. Naturally, the better the grade the more valuable the coin will be. Below is a chart that will help you determine the value of an 1872 two-cent piece based on the coin’s grade.