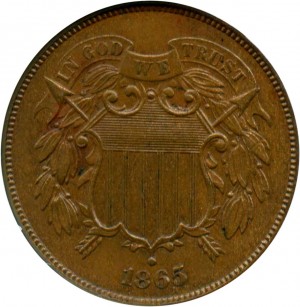 The two-cent piece, generally speaking, is a historically significant coins because it was one of the first new coins to be introduced in the wake of the American Civil War. The 1865 version of the two-cent piece, however, is more sought after than most other dates due to the fact that it was minted in the year which the Civil War was finally brought to a conclusion. This makes the coin valuable amongst collectors and historians alike.

The coin itself is simplistic in its design. On the obverse, you will find the US seal dominating the center of the coin. Above the seal is a banner that reads “In God We Trust.” Below the seal is the raised inscription of the 1865 date when the coin was minted. On the coin’s reverse there is a simple wheat wreath, within which is the inscribed 2-cent face value of the coin. Arching over the wreath and around almost half of the outer edge of the coin is an inscription reading “United States of America.”

Any 1865 two-cent piece has inherent value, and a lot of it, but collectors are always seeking out the coins that have been well-preserved over their 150+ year history. Being that there were not a large quantity of 1865 two-cent pieces ever minted, you can bet that very few have made it all the way through the years without showing some signs of wear and tear.

In the world of coin collecting, it isn’t enough that a coin simply looks to be in good shape. Instead, collectors demand that coins like the 1865 two-cent piece receive a grade derived from the opinion and inspection of an expert. Coin grades help tell a collector the exact condition the coin is in and, thus, the worth it has.

The following will serve to introduce you to the different grades as well as how they can be interpreted in terms of the 1865 two-cent piece.

Uncirculated: A coin that has spent time being exchanged and used on a daily basis is one that is said to be in circulation. Understanding this, it goes without saying that an uncirculated coin is one that spent no time being exchanged. As such, the coin’s surfaces, including the raised inscriptions and imagery, have been preserved perfectly. Though the coloration of the coin might have been altered due to its age, the coin looks and feels like it did the day it was minted.

Extremely Fine: Extremely Fine 1865 two-cent pieces, to the naked eye, will look almost identical to Uncirculated pieces. While that may be so, the reality of the matter is that the coin was circulated for a time, or was otherwise damaged to some very small degree. Though you may not be able to see these minor imperfections, they exist and ultimately affect the value of the coin.

Fine: Fine is the grade given to 1865 two-cent pieces that have been circulated quite a bit, but have not accrued a large amount of damage. Still, you will notice that the raised imagery on the coin will have begun to merge with the flat aspects of the faces. In all, these coins are still in pretty decent shape.

Good: Good is, by definition, the worst grade a coin can receive. While this may be so, there are varying degrees of Good. Some 1865 two-cent pieces will see their imagery entirely compromised, while others will see every aspect of the coin be completely discernable. You will find that most 1865 two-cent pieces fall under the Good grade.

Even though the 1865 two-cent piece is amongst the most sought after version, there have been quite a few of these coins preserved. As such, the overall price of the individual coins will have been driven down to an extent. The following table will help give you an idea of what a graded 1865 two-cent piece might cost.