The Royal Mint of England was among the first major mints in the world to release commemorative silver honoring the upcoming release of a 25th James Bond feature film. There are few, if any, fictional characters in the world as popular as James Bond. Created by British author Ian Fleming in 1953, James Bond has captivated the imagination of millions over the course of more than 60 years. As the world awaits the newest feature film in the franchise, the Royal Mint releases its second James Bond-themed silver piece with its new Pay Attention 007 silver coins. Now’s your chance to learn more about the James Bond Pay Attention 007 silver release! 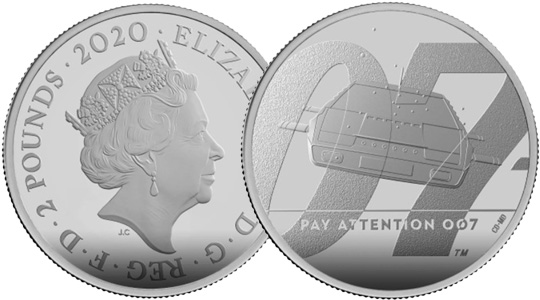 The silver coins for sale in the new British Pay Attention 007 release all share a common reverse design element. On the reverse side of the 2020 1 oz Proof British Pay Attention 007 Silver Coins, you will find the image of the Wet Nellie. This car was one of the many gadgets used by James Bond throughout the franchise. It was called the Wet Nellie because it had the potential to transform from a powerful sports car to a secure submarine. The design attempts to capture the Wet Nellie as it would have been in the feature films, moving through the water. The Wet Nellie is set at an angle in the design field with telltale bubbles fluttering around it.

In the obverse design field, all 2020 Proof British Pay Attention 007 Silver Coins feature the Jody Clark design of Queen Elizabeth II. The effigy of the Queen shown here captures Her Majesty in right-profile relief at the age of 89 and is shown wearing the George IV State Diadem Crown. The face value, date, and Queen’s name all feature on this side of the coin as well.

When it comes to choices in the 2020 Proof British Pay Attention 007 Silver Coins, there are three options available to collectors. The Royal Mint produced 1/2 oz, 1 oz, and 2 oz silver coins for collectors. Each one of the coins had a commemorative mintage ending in “007” in honor of the British secret agent’s codename. The coins had varying mintage levels, however, with the 1/2 oz silver coin set at 15,007, the 1 oz silver coin at 7,007 coins, and the 2 oz coin at 2,007 coins.

The packaging to house the 2020 Proof British Pay Attention 007 Silver Coins was the same regardless of the weight. Each coin came with a beautiful presentation package from the Royal Mint of England. The coin itself is housed inside a protective plastic capsule and set within a black Royal Mint display box. Included within the presentation box is a Certificate of Authenticity for each coin. All of this is packaged in a silver “007: Pay Attention 007” shipping box from the Royal Mint of England.

Ian Fleming released his first James Bond novel in 1953. Over the course of the next 11 years, Fleming would write 12 novels and two short-story collections following the action and adventure as Bond took off on thrilling missions around the globe to help defend freedom and democracy in the Western world on covert missions. Following Fleming’s death in 1964, eight other authors took up the mantel to write new Bond novels and novelizations. These authorized works come from authors Kingsley Amis, Christopher Wood, John Gardner, Raymond Benson, Sebastian Faulks, Jeffery Deaver, William Boyd, and Anthony Horowitz.

Based on these works and Fleming’s original novels, Eon Productions has developed and released a total of 24 feature films. The first of these films debuted in 1962 with iconic actor Sean Connery stepping into the role of the secret agent. Only two films have ever been produced in this franchise outside the bounds of Eon Productions, with Sean Connery appearing in one of those two films as Bond.

In the fourth quarter of 2020, Eon Productions will release its 25th feature film and 27th in total in the James Bond universe. In the upcoming No Time To Die, Daniel Craig will reprise the role of James Bond for the fifth-and-final time. Craig has portrayed Bond since 2006 and will step away from the role as the man who portrayed Bond the second-longest behind Sean Connery and Roger Moore, both of whom played Bond seven times.

The Pay Attention 007 Silver Coins are coming to JM Bullion, and you will have a limited window of time to purchase these coins before each weight is sold out. If you have any questions, please contact JM Bullion at 800-276-6508, online through our live chat, and via our email address. Please remember that you can follow us on Facebook for daily posts and weekly contests, and read our weekly blog posts for greater insight on upcoming new releases.