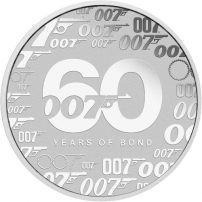 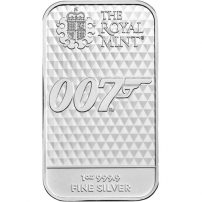 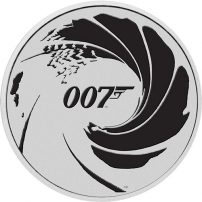 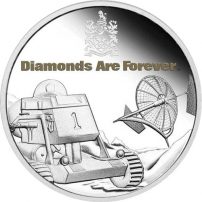 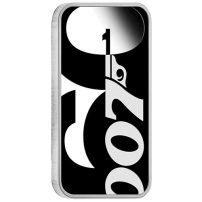 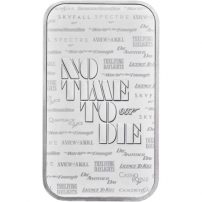 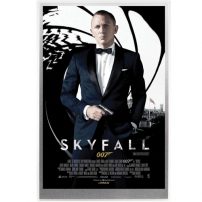 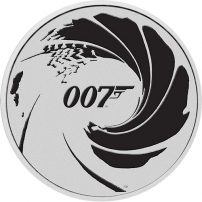 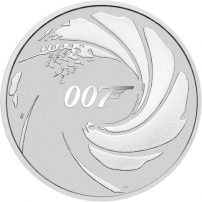 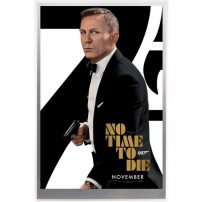 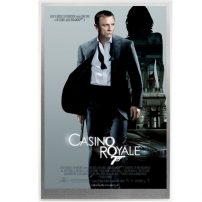 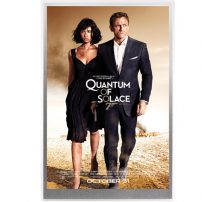 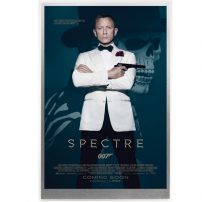 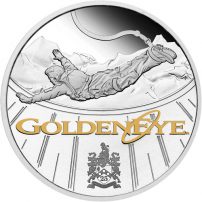 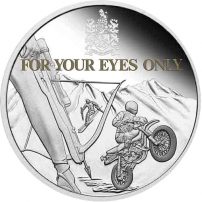 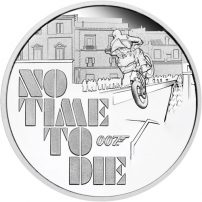 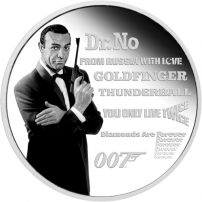 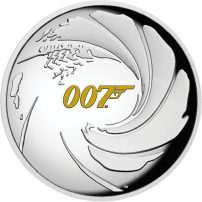 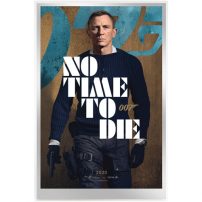 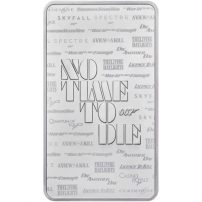 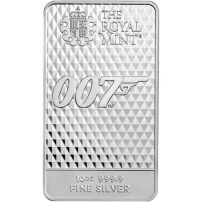 Authors around the world have introduced fictional characters that captivated the imagination of millions around the world. However, few of those characters are as popular as James Bond. The fictional character was first written about in 1953 and was said to be a British secret service agent serving in MI6. Since that time, Bond has been a part of popular culture for seven decades. The latest installment of Bond expeditions comes with the 2020 release of the 25th feature film in the Eon Productions franchise of Bond films. In honor of this release, mints across the globe have been issuing commemorative James Bond silver for investors and collectors. Below, you can read more about the variety of James Bond-themed silver.

The Perth Mint of Western Australia has issued two distinctive James Bond-themed silver coins for investors and collectors. The first of these issues was the James Bond Series 007 Silver Coin. The reverse field of these 2020 Tuvalu James Bond Series 007 Silver Coins features one of the simplest, yet most iconic, symbols of the Bond franchise. In the opening moments of every James Bond film produced to date, a stylized gun barrel swivels around and eventually takes aim at the silhouette of James Bond. Bond then turns and fires his gun at the barrel and the “007” logo swoops into view. This moment is captured on the reverse of the first Tuvalu-issued Bond silver coins.

On the obverse of the 2020 Tuvalu James Bond Series 007 Silver Coins, the Perth Mint uses the fifth-generation effigy of the Queen. While Australian coinage has moved on to the Jody Clark depiction of the Queen, Elizabeth II is still rendered on Tuvaluan coins in the 1998 design from Ian Rank-Broadley in which she wears the Girls of Great Britain and Ireland Tiara.

The first Tuvalu release of the James Bond Series 007 Silver coin came with two distinctive 1 oz silver options. While the designs were the same on each coin, the visuals and availability were not the same. The 1 oz silver coin in Brilliant Uncirculated condition had a limited mintage of only 30,000 silver coins and shipped with protective plastic capsules. The 1 oz High Relief Proof coin had several distinctive features. For starters, the 007 logo on the reverse is colorized with a golden finish. The high-relief strike delivers greater visual depth to the design field and higher relief on the design elements. These coins have a limited mintage of only 5,000 silver coins. The specimens are housed in a black presentation case with a themed 007 shipper and a Certificate of Authenticity.

For the second commemorative release of James Bond silver, the Perth Mint later released a design specifically in honor of the upcoming 25th feature film. The 2020 Proof Tuvalu James Bond Series No Time To Die Coins have a brilliant action scene in the reverse design. In this James Bond release, the coin features an image of Bond on a motorcycle as he rides from one rooftop to another through a busy city. The inscription on this face of the coin includes large block text that states “NO TIME TO DIE,” with the 007 emblem next to it. The coins have the same obverse as the first release.

As proof coins, this release comes with a mintage of only 5,000 silver coins. The coins have a numbered Certificate of Authenticity, a themed display box, and a James Bond-themed shipper. The proof coins have frosted designs and mirrored fields.

Around the same time the Perth Mint was issuing its first James Bond silver, the Royal Mint of England released the first of its own James Bond designs. The Royal Mint’s 007 collection features two coin designs and the first-ever James Bond-themed bullion bar series. First up in its collection was the Bond, James Bond release.

In the 2020 Proof British Bond, James Bond release, the Royal Mint of England features the common obverse design found on all British coins. Queen Elizabeth II is shown on the obverse of the coins in right-profile relief. This is the definitive fifth-generation design created in July 2015 by Jody Clark. It depicts the Queen with the George IV State Diadem Crown on her head. Each of the coins from the Royal Mint comes with proof visuals incorporating contrasting frosted designs and mirrored background fields.

On the reverse side of 2020 Proof British Bond, James Bond coins, you will find a depiction of one of the earliest Bond sports cards to feature in the franchise. Bond is known among his peers at MI6 as 007, his codename, but when he’s in public, he has a unique way of introducing himself. He always introduces himself as “Bond, James Bond.” The reverse side of the coins in this first British release shows a side profile from the driver’s side of the car. This is the Aston Martin DB5, the first supercar in a Bond film. The Aston Martin DB5 was a British luxury grand tourer that was released in 1963. The car drives through a large “0” at the start of 007 within the design field.

In the second James Bond release from the Royal Mint of England, another of the famous James Bond sports cards is depicted on the reverse. In the 2020 Proof British Pay Attention 007 Silver Coins, the reverse field of the design element depicts the Lotus Espirit sports car. The particular car shown here is known as Wet Nellie and was used in The Spy Who Loved Me, the 10th James Bond feature film released in 1977 with Roger Moore portraying Bond. Matt Dent and Christian Davies designed the image of the Wet Nellie, a modified Lotus Espirit that Bond could use as a submarine when the mission called for it. The design attempted to capture the Wet Nellie while underwater, with the car set at an angle and telltale bubbles in the field. The obverse features the same effigy of Queen Elizabeth II as the first release.

In a first for James Bond-themed silver, the Royal Mint of England released James Bond silver bullion bars in the fall of 2020. The bars were part of a release series that included a 1 oz gold bar as well, with the same designs used on all releases. The obverse side of the James Bond No Time To Die Silver Bars includes the Royal Mint of England logo at the top of the field, the 007 emblem in the center of the design field, and the weight, purity, and metal content at the bottom. The bars also have a unique serial number inscribed at the bottom of the obverse.

On the reverse face of James Bond No Time To Die Silver bars, you will find large text lettering with the name of the upcoming 25th feature film from Eon Productions. The letters read “NO TIME TO DIE” and the background field of the bars features the names of the other iconic feature films in the history of the Bond franchise. The silver bars have unique visual elements that include alternating frosted and polished fields.

Background on the Mints

The Perth Mint issues the coins available for the island nation of Tuvalu. Located in the city of Perth, Western Australia, the Perth Mint is the oldest operating mint in the nation of Australia. It was originally opened in 1899 as the third and final Royal Mint branch facility in the nation. Australia launched its federation movement three years later and the Perth Mint would continue to provide coining capacity to the nation through the next six decades. When Australia launched its own sovereign mint in 1965 with the founding of the Royal Australian Mint, the Perth Mint was transferred from British hands to the state government of Western Australia. Though it is not authorized to issue national coinage, its coins are legal tender.

The Royal Mint of England is one of the world’s oldest operating mints. The modern Royal Mint is a government-owned mint issuing coins for the United Kingdom and operates a state-of-the-art coining facility in Llantrisant, Wales. The Royal Mint of England can trace its roots back to the founding of the London Mint in 886 and it operated from the Tower of London for nearly 800 years before moving to Royal Mint Court. In the 1960s, the Royal Mint moved to its current location in Wales.

British author Ian Fleming created the James Bond fictional character in 1953 for the first release of a novel about the British secret service agent. All total, Fleming wrote 12 novels and two short-story collections between 1953 and his death in 1964. Eight other authors later took up the Bond mantle in writing authorized novels and short-story collections. In 1962, Eon Productions adapted the original Bond novels from Fleming into feature films.

In all, 26 features films have been made, with 2020’s No Time To Die scheduled to be the 27th. Eon Productions has developed 24 of the existing 26 films and also produced the upcoming 27th film as its 25th film. Through the 1960s and early 1980s, James Bond feature films were released at a pace of roughly one movie every other year. Sean Connery is the most iconic of the Bond actors. He featured in the first five feature films in row, six of the first seven films, and seven in all with his appearance in 1983’s Never Say Never Again. That film was one of only two not produced by Eon Productions, making Connery the only man to portray Bond in and out of the Eon Productions universe.

For the upcoming No Time To Die, Daniel Craig will step into Bond’s shoes one last time. Craig has portrayed Bond five times now from 2006 to 2020, putting him second behind only the seven appearances of Sean Connery and Roger Moore, the latter having portrayed Bond seven times in a row in the 1970s and 1980s. Craig has already announced that his appearance as Bond in No Time To Die will be his final time as the British secret agent.

If you have any questions about the James Bond-themed silver available from JM Bullion, please don’t hesitate to ask. You can call us on the phone at 800-276-6508, chat with us live online, or simply send us an email with your inquiries.