Since 2015, the Native American Mint has been attracting collectors to its Proof Dollar Series of 1 oz silver coins representing countless indigenous nations from across North America. Although the series focuses on one release for each of the US states, the series represents indigenous tribes whose original homelands cross modern international borders to include both US and Mexican states, as well as Canadian provinces. Each year that designs are issued in the Native American Mint silver series, five fresh images are available representing different regions and tribes. The third and fourth designs of 2020 are now available from JM Bullion representing some of the very first tribes to come in contact with Europeans. 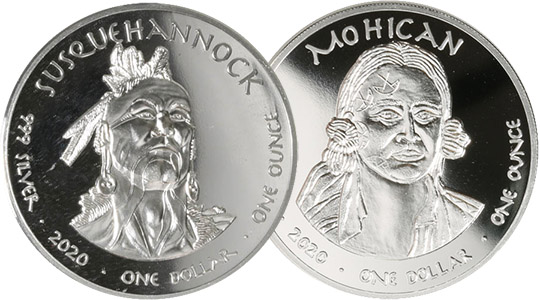 The 2020 1 oz Proof Maryland Susquehannock Albatross Silver Coin is the third release in the 2020 schedule and the landmark 30th overall in the series. In keeping with all other releases in the series, you will find a member of the tribe depicted on the obverse of the coin and an animal species native to its tribal home range on the reverse. On the obverse of the Maryland Susquehannock Albatross coin is the image of a stoic figure from the tribe. He has ornate earrings in and feathers woven into his hair at the top of his head and back of his head. Inscriptions on this face of the coin include the date mark, nominal value, weight, purity, metal content, and the name of the tribe.

For the reverse side of the 2020 Maryland Susquehannock Albatross Silver coin, the Native American Mint features an albatross in the foreground flying low over the waters of the Chesapeake with other birds flying in the background. Inscriptions on this side of the coin include the issuing nation, the represented state, and the animal.

The Susquehannock people historically lived across a broad tract of land from southern New York and eastern Pennsylvania down through Maryland. Despite relatively small numbers compared to other tribal nations, the Susquehannock managed to survive and thrive in a region that was squeezed between the Shawnee in the west, the Iroquois in the north, and the Cherokee in the south.

In the 2020 1 oz Proof Massachusetts Mohican Wild Turkey Silver Coin release, the Native American Mint honors one of the most prominent indigenous tribes from the Northeastern United States. For the obverse face of the Massachusetts Mohican Wild Turkey Coin, a member of the Mohican tribe is depicted. He has ceremonial paint on his forehead down his cheek and chin on one side of his face. His hair is braided up on either side and there are inscriptions, like other coins, of the tribe represented, the weight, purity, metal content, date of issue, and nominal value.

On the reverse side of these 2020 Massachusetts Mohican Wild Turkey Coin is a depiction of a male Tom and a female wild turkey. When the Europeans first arrived in North America, wild turkeys were prominent in large numbers across the United States from one coast to the next. Their numbers dropped dramatically in the two centuries following European colonization of the continent, but have rebounded in the 20th and 21st centuries. Though not as prominent as it once was, the species is now easily seen in the wild throughout the East Coast, Northeast, Great Lakes, and Upper Midwest.

Mohicans represent the state of Massachusetts in the Native American Silver Dollar Series, but the traditional home range of the Mohicans included larger swaths of land in eastern New York. The original range for the Mohicans included roughly one-quarter of western Massachusetts, as well as a small portion of northwestern Connecticut and southwestern Vermont, with large stretches of the Hudson River Valley upper tidal ranges in New York under Mohican control. Unfortunately, wars with the Mohawks pushed the Mohicans out of New York and the American Revolution saw the Mohicans eventually move to central and western New York to join the Iroquois Oneida on a reservation there. In the 1820s and 1830s, federal relocation forced the Mohicans to a reservation in what is now Shawano County, Wisconsin.

The Proof Dollar Series from the Native American Mint offers 1 oz silver coins with .999 purity. Coins in this collection are offered with a protective plastic capsule for individual coins, whether you purchase one or more. The coins are produced by the Jamul Sovereign Nation and the Native American Mint on behalf of the many diverse indigenous tribes across the United States, Canada, and Mexico. Each one of the coins is a proof specimen with a satin visual. This delivers a brilliant background with a frosted design element.

These Proof Dollar Series silver coins are unique in that each one represents the only American silver item out there that is not a round, but also not an official bullion coin of the United States of America. The Jamul Sovereign Nation, like other federally-recognized tribes, is a dependent domestic nation within the United States. These tribes have the power of independent governance and the Native American Mint strikes these coins with the Jamul Sovereign Nation on behalf of these other tribes, but the coins are not legal tender in the United States. Though a One Dollar value has been assigned to each specimen, only the United States Mint has the federal authority to issue legal tender coinage.

You can find these 2020 Proof Dollar Series coins, and those from previous issues, available online from JM Bullion. Our customer service team is available at 800-276-6508, online through our live chat, and via our email address. Don’t forget to check our weekly blog updates and follow us on Facebook for daily posts and spot price contests.