In 2011, the Royal Canadian Mint released the first of many wildlife-themed coins in its catalog. Known as the Canadian Wildlife Series, the six-coin collection featured distinct reverse designs of prominent wildlife species found throughout the wilderness of Canada. Following the intense demand for and popularity of this collection, RCM took the designs in a different direction with the Wild Canada Privy Series on Canadian Silver Maple Leaf coins. Starting now, the final two designs in the collection are available to purchase exclusively from JM Bullion. 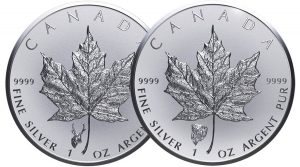 In the first release of the 2018 Wild Canada Privy Series, the pronghorn antelope is featured in a privy mark on the reverse side of Canadian Silver Maple Leaf coins. The design on the reverse of these 2018 1 oz Antelope Privy Canadian Silver Maple Leaf Reverse Proof coins includes the famed sugar maple leaf design created in 1979 by Walter Ott for the Royal Canadian Mint to use on the Canadian Gold Maple Leaf coins. Engravings on this side of the coin include “Canada,” “9999,” and “Fine Silver 1 oz Argent Pur.” To the lower left of the sugar maple leaf design is the small privy mark of a pronghorn antelope’s head.

On the obverse face of 2018 Antelope Privy Wild Canada Silver Coins is the effigy of Queen Elizabeth II. Her Majesty is featured here in right-profile relief. This is the fourth-generation design used on Canadian coinage and is significant in two ways. First, it is just the second design of a monarch for Canadian currency created by a Canadian artist: Susanna Blunt. Second, this design marks the first time since the reign of Elizabeth II’s father, George VI, that a British monarch is featured on Canadian coinage without a crown.

The 2019 Antelope Privy Wild Canada Silver Coin is issued fourth in the six-privy Wild Canada Series. The Antelope Privy appears in the same order that the original pronghorn antelope design appeared in the Canadian Wildlife Series. Each coin is available as a reverse proof specimen with strong, frosted background fields and deeply-mirrored, clear design elements for beautiful visual contrast. The coins have the following highlights:

The final coin of the Canadian Wildlife Series in 2013 was the Wood Bison issue. Designed by Emily Damstra, the Wood Bison Silver Coin depicted one of these large, powerful land mammals rumbling along the shore of a lake. The wood bison, or mountain bison as some call it, is a northern subspecies of the greater American bison species. The original range of these massive land mammals included many of the boreal forest regions of the US state of Alaska, the Yukon Territories, western portions of the Northwest Territories, northeastern portions of British Columbia, northern portions of Alberta, and northwestern portions of Saskatchewan in Canada.

On the reverse of the 2018 1 oz Wood Bison Privy Canadian Silver Maple Leaf Coin is the image of the sugar maple leaf in the center, with a small wood bison privy mark just below it. The obverse of the coins features the fourth-generation portrait of Queen Elizabeth II from Susanna Blunt and the Royal Canadian Mint.

Background on the Canadian Wildlife Series

The Canadian Wildlife Series was a six-coin collection that debuted from the Royal Canadian Mint in 2011. The series featured two designs issued per year with a production run that concluded in 2013. The animals featured in the series appeared in the following order:

The designs in the Canadian Wildlife Series were initially created for the reverse face of the coins by Pierre Leduc, a noted wildlife artist and engraver who has worked with the Royal Canadian Mint on various wildlife-themed designs. Leduc created artwork for the 2011 and 2012 coins. Emily Damstra created the works used on the 2013 Pronghorn Antelope and Wood Bison designs, the first of what would become regular contributions from Damstra for the RCM as she later worked on the Birds of Prey Series launched in 2014.

Each of the original Canadian Wildlife Series coins were BU specimens with 1 oz silver and a .9999 purity level. The coins had a much higher mintage figure capped at 1 million per design.

About the Wild Canada Series

Rather than focusing on each of the animals again for individual releases, the mint used a popular tactic involving the Canadian Silver Maple Leaf. The popular Maple Leaf coin was issued as a reverse proof specimen with the aforementioned limited mintages and a small privy mark to represent each of the animals. Like the original collection, the Wild Canada Series features two releases per year and follows the same order of Gray Wolf (2016), Grizzly Bear (2016), Cougar (2017), Moose (2017), Pronghorn Antelope (2018), and the Wood Bison (2018).

The coins in the Wild Canada Series have limited mintage figures of just 50,000 coins per privy mark. The Pronghorn Antelope and Wood Bison are the final issues in the six-coin program and are currently on sale at JM Bullion. We’re proud to be the exclusive release partner for the final two designs of the Wild Canada Series. The coins are available to purchase individually inside of protective plastic flips, mint tubes of 25 coins, and mint boxes of 500 coins.

Now is your chance to grab the final coins in the Wild Canada Series. With just 50,000 available in total, you can expect these popular coins to sell out quickly. The coins are currently available for purchase online from JM Bullion. If you have any questions or need help when buying silver, please contact us at 800-276-6508. You can also connect with us online through our live chat service and email address features. Don’t forget to check back to our blog each week for the latest information on upcoming coin releases and follow us on Facebook for other exciting numismatic information.