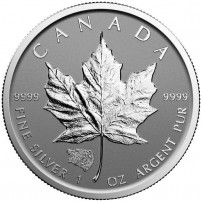 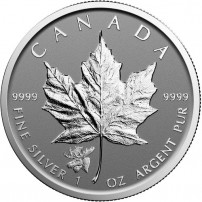 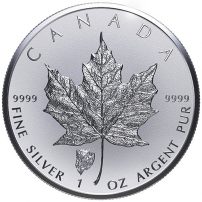 However, instead of individual coins featuring the original images as the main design concept, the Royal Canadian Mint is combining its popular Canadian Silver Maple Leaf series by offering them up with privy marks honoring the Canadian Wildlife Series. The following are the important highlights for the upcoming Wild Canada Coin Series:

The obverse of all of the coins in the Wild Canada Silver Coin collection feature the right-profile bust of Queen Elizabeth II. Her Majesty is shown here in the fourth-generation Canadian design created by Susanna Blunt in 2003. The reverse proof visuals on the coins deliver mirrored design elements over frosted background fields.

On the reverse side of all Wild Canada Series coins you’ll find the sugar maple leaf design that has become so famous on the Canadian Silver Maple Leaf. All of the engravings commonly found on that coin program will persist on the Wild Canada Series coins, with an additional privy mark for each of the Canadian Wildlife Series designs featured to the bottom left of the maple leaf. A total of six privy mark coins will be released, featuring the wolf, grizzly bear, cougar, moose, antelope, and wood bison.

On the reverse side of all Wild Canada Silver Coins, you will find the original image of the sugar maple leaf created in 1979 by Walter Ott. The 2016 releases of the Wild Canada Series include privy marks to the lower left of the maple leaf that feature the Wolf and the Grizzly Bear, the first two animals introduced in the original Canadian Wildlife Series.

The second year of issue for the Wild Canada Silver Coins features privy marks honoring the 2012 releases from the Canadian Wildlife Series. The coins continue with the traditional Canadian Silver Maple Leaf refer, while including a privy mark with the head of the cougar in the first release and the moose in the second release.

About the Canadian Wildlife Series Coins

The Royal Canadian Mint’s Canadian Wildlife Series coins consisted of six individual designs on 1 oz., .9999 pure, silver coins. All of the coins in the series had a face value of $5 (CAD) that was backed by the Canadian government. The release schedule for the coins in the series consisted of two coins released each year over a three-year period. Each animal chosen to represent Canadian wildlife on the coins holds a special place in the heart of Canadians, and has deep roots in the vast frozen tundras and wooded forests of the country.

Each of the six coins in the original Canadian Wildlife Series was limited to a mintage of 1 million bullion coins. The relatively limited mintage of these coins, their short, three-year production run, and the one-time designs made the original coins in the series immensely popular. By the time the final coins were released in 2013, demand for the products was off the charts.

If you have any questions about the limited-issue Wild Canada Series coins, our customer service team is ready to assist you. Please call JM Bullion at 800-276-6508, chat with us live online, or email us directly. You can also visit our Payment Methods FAQ page to find quick answers to common questions about payment options and purchasing minimums/maximums.