More critical to its success long term has been the use of rotating annual designs. The Somalian Elephant coins have a new obverse design of the African elephant each year. Combined with the impressive purity of both the silver and gold coins, this program has grown by leaps and bounds in the 2010s. With the 20th new design in the overall series now here, let’s take a look at the Somalian Elephant Series history and the new 2018 Somalian Elephant Coins. 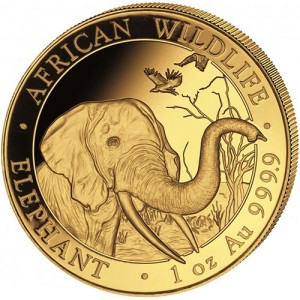 As the 2018 Somalian Elephant coins arrive for purchase this year in gold, silver, and platinum, the coin program has yet another stunning image of the African elephant to offer its devout following of investors and collectors.

The obverse of the 2018 Somalian Elephant coin features the image of a massive adult elephant in the foreground of the design field. Its long tusks breach the rim engraving area, with its trunk raised and reaching out into the rim engraving space as well. The elephant almost appears as though it is going to emerge from the coin’s surface. Engravings include “African Wildlife” above, “Elephant” to the lower left, and “1 oz Ag 999.9” to the lower right.

Each of the 2018 Somalian Elephant coins have the familiar reverse design of the coat of arms for Somalia. This design includes a crowned shield in the center with horizontal lines and a singular star, similar to the singular star of the nation’s flag. Leopards stand on either side of the shield to support it, with their feet perched on crossed spears below with large fern leaves and a ribbon banner. The engravings include “Somali Republic” above, the year of issue split on either side as “20” and “18,” and the face value of “100 Shillings” below.

Both 2018 1 oz Silver Somalian Elephant and 2018 1 oz Gold Somalian Elephant coins are available now at JM Bullion in BU condition. Coins in BU condition have no signs of wear and tear, though you may notice the presence of minor flaws resulting from the striking of blanks during production. These flaws are limited to breaks in the luster, spotted surfaces, or contact marks.

In 1999 the African Wildlife Series launched with the Zambian Silver Elephant Coin. The original series featured the same tenets of design that carry on today in the Somalian Elephant collection. The obverse side featured a new African elephant design each year with engravings that included “African Wildlife,” “Elephant,” and the weight, metal content, and purity of the coin.

Flip those early coins over to their reverse side and you’ll find the national coat of arms. In this case, it was Zambia’s coat of arms. Much like the modern versions of the coin, the year of issue was split with the first two digits to the left and the latter two digits to the right of the design. The coin’s face value was engraved below the coat of arms, and for the Zambian Elephants the phrase “Bank of Zambia” was engraved above. An important factor as the coins shifted to Somalia, but we’ll come back to that.

From 1999 to 2003, the Zambian Elephants were introduced each year with new obverse designs and the same reverse designs. The coins included .999 precious metal purity and a face value of 5,000 Kwacha. Mintage figures at this point in time were capped annually at just 5,000 coins in total.

Change in the Nation of Issue

Starting in 2004 the coins were no longer issued for Zambia, with the changeover to the now-well-known Somalian Elephant Series. At first there was very little real change to the coin program. The limited mintage of 5,000 coins annually remained with the program, and the coins were largely available in just the 1 oz weights.

The rotating obverse designs of the African elephant continued forward with all the engravings on the obverse staying the same as well. The reverse of the coin saw a switch from the Zambian coat of arms and face value to that of the Somali coat of arms and a new face value in Somali Shillings. The Somalian Elephant coins have no mention of the central bank there, only the phrase Somali Republic engraved above.

Somalian Elephant coins don’t actually have the sovereign backing of Somalia, but the coins are nevertheless issued with a face value in Somali Shillings. Interesting changes over time for the Somalian Elephant Series include:

Keep Up with JM Bullion for the Newest Coins!

2018 1 oz Silver and Gold Somalian Elephant coins are available from JM Bullion. Stay tuned to our blog each week for the latest on new coin releases, precious metals news, and fun, informative posts on all things, gold, silver, platinum, palladium, and copper!