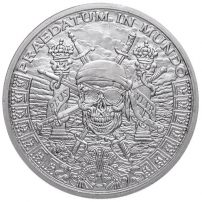 1 oz Pieces of Eight Silver Shield Round (New)
As Low As:
In Stock 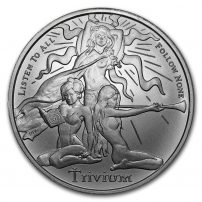 1 oz Trivium Girls Silver Shield Round (New)
As Low As:
In Stock 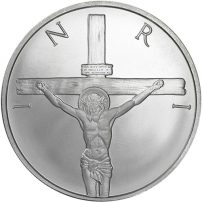 1 oz Crucifixion Silver Shield Round (New)
As Low As:
In Stock 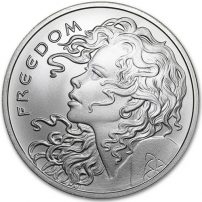 1 oz Freedom Girl Silver Shield Round (New)
As Low As:
In Stock 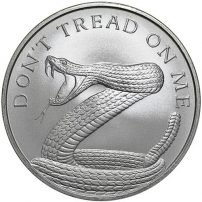 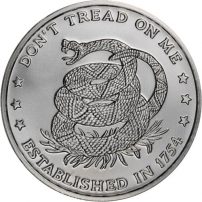 1 oz Dont Tread on Me Eternal Vigilance Silver Round (New)
As Low As:
Out of Stock

Silver rounds are a popular option for those buying silver who want an alternative to silver bars or silver bullion coins. The vast majority of silver rounds are available with low premiums over the spot price of silver, no mintage caps, and regular production. While some silver coins are released with new designs each year that disappear in continuous years, silver rounds often feature designs which are struck time and again by the mint.

The Golden State Mint is one of many private American mints issuing silver rounds. The Silver Shield Collection is one of its most unique and includes one-of-a-kind designs you won’t find available in collections from other mints. There are many designs available, and below you can find out more about the Silver Shield rounds available through JM Bullion.

Background on the Silver Shield Rounds

Many of the designs in the Silver Shield Collection from Golden State Mint deliver imagery that addresses the most controversial of issues from the modern day to bygone eras. Each design makes a statement with its distinctive elements and impressive detail. The Golden State Mint has more than 10 designs available in this collection with more constantly added to the portfolio. Right now, you can find many of the most impressive designs available in JM Bullion’s offering of Silver Shield rounds when you look to buy silver.

One of the first releases in the series came in the form of the Pieces of Eight design. The very precious metal that these rounds are made from drew colonizers from around the globe to places such as Central America, South America, and the African continent. These outside powers believed in a divine right to take what they saw regardless of the ownership of natural resources and land by indigenous peoples.

Silver was a particularly attractive draw for the Spanish and Portuguese as original colonizing powers in the New World. Spanish conquistadors plundered the wealth of empires such as the Aztec and Inca in the Americas, leaving death and devastation behind all in search of silver and gold. The Pieces of Eight Silver Shield Round has an obverse design with a skull wearing an eye patch. The phrase “Praedatum in Mundo” is featured on this side and translates as “A Predatory World.” There are eight swords around the skull, with one each representing colonial powers of the New World including Spain, England, France, Portugal, Denmark, Netherlands, Belgium, and the United States.

The reverse of these Silver Shield Rounds features a design you won’t find on the other releases from the 2018 collection available at JM Bullion. This design includes an eight-pointed sun in the center of the field with waves of sunshine spilling forth. Around the edge are engravings of “Silver Shield” and the round’s weight, purity, and metal content.

Entering 2018, the Golden State Mint continued to release beautiful designs for the Silver Shield Rounds. Some offered a clever twist on historic coins while others shone a light on rallying cries that have sparked rebellion and freedom. There are a total of four 2018 Silver Shield Rounds available from JM Bullion including:

On the reverse of all these Silver Shield Rounds, you’ll find a new common design used in the collection. This new depiction features a long sword standing on its point. The sword is embraced and encircled by ornate design elements. There are engravings around this of “Silver Shield” and the round’s weight, purity, and metal content, along with a year of issue. The very outer edge of the design has waves of sunshine reminiscent of the first design used on the 2016 Silver Shield Rounds.

About the Golden State Mint

The Golden State Mint has more than 40 years of experience in the precious metals industry. The mint was founded in 1974 by Jim Pavlakos whose son Andrew has joined the mint to continue its growth into the future. The products produced in-house by the Golden State Mint have the greatest attention to detail and quality in design. The mint strikes rounds in silver, gold, and copper, with many of the designs from the Silver Shield Collection also available in gold and copper round versions. The mint operates locations in Southern California and Central Florida.

If you have any questions about these impressive rounds, feel free to contact JM Bullion. You can reach our customer service team at 800-276-6508, online using our live chat service, and via our email address.