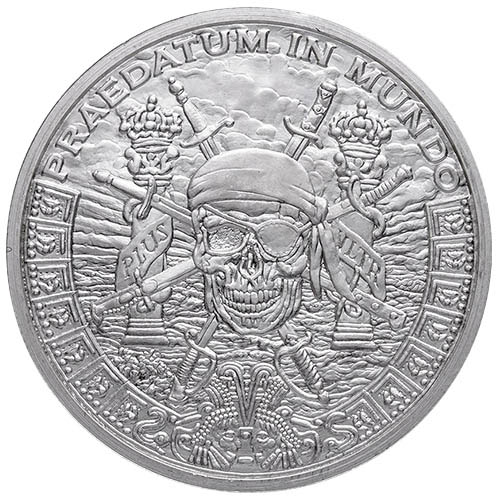 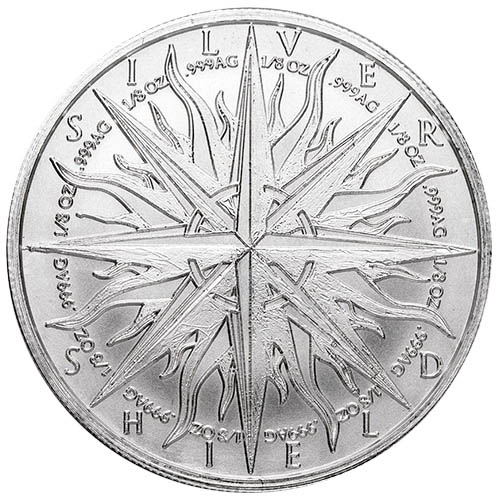 The Silver Shield Collection from the Golden State Mint is an impressive series of silver rounds which contains a dizzying array of design options. All of the round designs express a sentiment surrounding controversial issues of the modern era and mankind’s history, but each one is unique in its own right. The 1 oz Pieces of Eight Silver Shield Round is currently available to you online from JM Bullion.

One of the first issues in the Silver Shield Collection was a design that highlighted the high toll on human life that precious metals and natural resource exploitation have had in the past 500 years. The North and South American continents were home to flourishing empires long before colonial powers arrived.

The 1 oz Pieces of Eight Silver Shield Round bears the engraving of a phrase “Praedatum in Mundo” on the obverse face. This translates into English as “A Predatory World.” Mankind has always struggled against nature for dominance as a species on the planet, and sometimes these violent clashes pit mankind against one another.

A prominent feature of the obverse of the 1 oz Pieces of Eight Silver Shield Round is the collection of eight swords run through the Skull in the center of the design. Each of these swords represents the impact of colonialism in the Americas by a different power. Represented in these swords are Spain, England, France, Portugal, Denmark, Netherlands, Belgium, and the United States.

The Spanish Empire was among the first to bring devastation to the New World. Conquistadors were attracted to the continent not only by the new lands, but also by the vast resources of gold and silver already exploited by indigenous empires such as the Aztec Empire of Central America.

We encourage JM Bullion customers to reach out to us with questions at 800-276-6508, chat with us live online, or simply send us an email with your inquiries. Don’t forget to check the latest price of silver on our homepage as well!

John from MD - June 25, 2018
"Have always like Silver Shield. One of my favorite generic silver bullion. Most are low mintage and they change designs often. "