The Perth Mint is no stranger to exceptional gold and silver coin designs, but it never hurts to get some outside input on new designs. In a newly released Perth Mint Star Trek silver coin, the actor who famously portrayed Captain James Tiberius Kirk in Star Trek: The Original Series and countless feature films had a hand in selecting the design. William Shatner provided input on what type of design element he thought would be a fitting tribute to Captain Kirk for this new colorized proof silver coin. Now’s your chance to learn about the design and even see what Shatner himself had to say about the design. 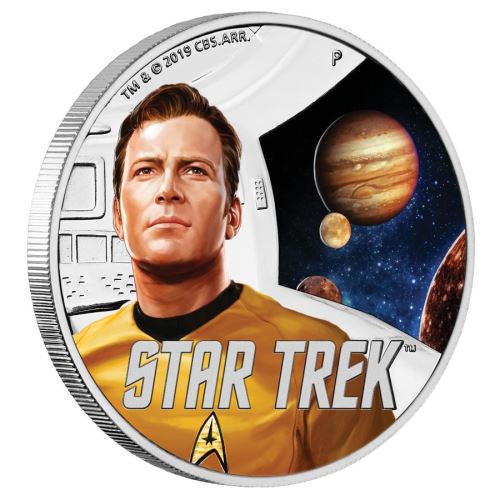 On the reverse of the 2019 Proof Tuvalu Star Trek Captain Kirk Silver Coin is a depiction of Captain Kirk on the bridge of the U.S.S. Enterprise NCC-1701. The colorized elements of the reverse design capture Shatner’s Captain Kirk character in real-life colors with his yellow-orange shirt and the Star Trek delta logo on his chest. Out the window in the background, you are offered a stunning colorized view of deep space. Featured prominently in this portion of the design field is the planet Jupiter with several of its orbiting moons.

The obverse face of 2019 1 oz Proof Tuvalu Captain Kirk Silver Coins bears the Ian Rank-Broadley effigy of Queen Elizabeth II. This is the fourth-generation design from the Royal Mint of England that was created in 1998 and has been in use across various Commonwealth nations over the past two decades.

The 2019 Proof Tuvalu Star Trek The Original Series Captain Kirk Silver Coins are uniquely housed inside of a black display case with a clear lid so you can easily view the coin’s design without having to remove it or even open the case’s lid. Each case is packaged within a Star Trek-themed shipper box that includes colorized images of Captain Kirk, Leonard Nimoy as Spock, and George Takei as Sulu. The Perth Mint issues these coins on behalf of Tuvalu with a face value of One Dollar. The coins feature 1 Troy oz of .9999 pure silver and have a limited mintage of only 3,000 coins. Each one also comes with a numbered Certificate of Authenticity.

The Perth Mint had previously issued a robust series of proof colorized Star Trek silver coins in 2016 to mark the 50th anniversary of the debut of The Original Series on American television. In 2018, William Shatner shared his views that the Perth Mint design a new Captain Kirk coin including the image of Jupiter in the design field. Jennifer McKenna’s design for these new silver coins incorporated those elements and resulted in Shatner personally endorsing the release of this design, even going as far as calling the image “a lovely design filled with meaning.”

Shatner’s acting career skyrocketed to new heights as a result of his appearance in Star Trek: The Original Series. He appeared as Captain James T. Kirk in all three seasons of The Original Series. Though it last only three seasons, the show gained a massive cult following when it went into syndication in the 1970s. Shatner would later portray Captain Kirk in seven different feature films released between the 1970s and 1994.

These impressive new proof colorized silver coins are available to you today from JM Bullion. If you have any questions, you can always contact us at 800-276-6508, chat with us live online, or email us directly. Don’t forget, you can also follow us on Facebook for daily updates and information, and check in with the blog every Friday for new posts on our latest releases.