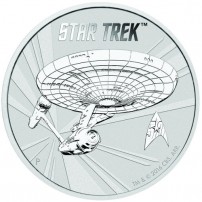 In 1966, Gene Roddenberry’s classic science fiction entertainment franchise debuted on American television screens. Captain James T. Kirk and Commander Spock led the crew of the starship Enterprise where “no man had dared to go before.” The Sci-Fi series is credited with changing the face of the genre, and as the 50th anniversary of the Star Trek series and films approaches, Australia’s Perth Mint has released a number of commemorative silver coins for Trekkies everywhere.

Roddenberry first introduced the Star Trek concept to television executives in 1964. The first installment in the franchise was the television series Star Trek: The Original Series. The show was set mostly aboard the starship Enterprise and took place in the 2200s. Although the show only ran from 1966 to 1969, it spawned an almost immediate cult following.

In 2016, the Star Trek franchise will celebrate its 50th anniversary with 13th feature film release entitled Star Trek Beyond, and the Perth Mint is getting in on the act with a series of commemorative silver coins honoring various moments, characters, and symbols from the Sci-Fi cult classic.

The Perth Mint introduced the first of the Star Trek Silver Coins to investors and collectors in January 2015. The exact number of coins planned in the series remains unknown, but the first coins introduced in the series were released in pairs. Coins in the series are introduced in order of their place in the franchise’s timeline, and include a coin dedicated to a captain and a separate to his starship, with limited numbers of coins available in a two-coin proof set, as well.

All of the coins in the Star Trek Silver Coin series from the Perth Mint share some common features. Each coin has a face value of $1 backed by the government of Tuvalu. The coins in the series feature a “P” mint mark, the mint year, contain 1 oz of .999 pure silver, and feature contrasting, deeply-mirrored finishes and colorized design sets for either the captain or the vastness of space on the starship coins. Mintage for each coin is limited to a total of 6,500, with 5,000 reserved for single-coin release and 1,500 held back to be released in two-coin proof sets.

On the obverse side of all coins in the set is Ian Rank-Broadley’s right-profile portrait of Queen Elizabeth II. Used on coins throughout current and former commonwealth countries from the Caribbean to New Zealand, Her Majesty’s effigy is surrounded by the name of the nation of issue, her name, the face value of the coin, and the year of minting.

All Star Trek Silver coins released to date by the Perth Mint are available through JM Bullion. The first coin in the series honored Captain James T. Kirk of the starship Enterprise. Played by the iconic William Shatner in The Original Series, the coin’s reverse side bears the image of Shatner in the title role as Captain Kirk. His image is featured in full color, with the Star Trek design motif in the background.

A complementary coin in this same release honors the U.S.S. Enterprise NCC-1701, the starship commanded by Captain Kirk. On the reverse of this coin, you’ll find a similar Star Trek design motif in the background, but the starship itself remains in a silver finish with a brightly colored, brilliant view of outerspace in the background. As mentioned above, these coins are available individually, or in a two-coin proof set (extremely limited availability!).

The second coin in the series commemorates the second spinoff television series, Star Trek: The Next Generation. Set a century after The Original Series, this show followed Captain Jean Luc-Picard and his crew aboard the advanced U.S.S. Enterprise NCC-1701-D. In the series, legendary actor Sir Patrick Stewart played the role of Captain Picard, and is featured on the coin’s obverse in full color and in character. The background features the same Star Trek motif from the previous coin set.

A second coin was released in this set honoring the advanced starship that Captain Picard commanded. Again, the design themes were altered slightly on this coin to present a similar starship background motif, the Enterprise itself in the center, and a beautifully colorized galactic background. These coins were also capped at 5,000 for individual sales and 1,500 for a two-coin proof set.

One of the more recent releases was the coin series honoring the third spinoff on television, Star Trek: Deep Space Nine. This series veered from some of the common themes, with Captain Benjamin Sisko leading a crew aboard a Federation space station that was assigned to guard the Bajoran wormhole. Captain Sisko was played by actor Avery Brooks, who appears on the reverse side of the coin in full color in his role as Captain Sisko. The complementary coin in this series featured the Deep Space Nine space station, with a colorized background representing the outer reaches of the Milky Way galaxy.

Star Trek Silver Coins make an excellent addition to any numismatists collection, and at .999 pure silver content, are also good coins for investors looking to purchase high quality products. When you select a Star Trek Silver Coin from JM Bullion, you have the option of paying via credit/debit card, paper check, bank wire, Bitcoin, ACH, or PayPal. Bank wire and PayPal transactions process immediately, releasing your order to our shipping queue as fast as possible.

Credit/debit card transactions generally process within one business day. Paper checks and ACH take up to 6 business days to process, but you are eligible for a 4% discount on your purchase (as do bank wire transactions).

JM Bullion packages all products in discreet boxes for shipping, with no easily identifiable labels. We offer free standard shipping and insurance on all purchases over $199, and ship through the United States Postal Service or UPS.

If you have any questions about these brilliant proof coins, feel free to contact a JM Bullion associate. We’re available on the phone at 800-276-6508, online through our live web chat, and via email. New Star Trek coins will be released in the future by the Perth Mint, so make sure to check back frequently to keep tabs on any new releases!