It’s hard to argue with the popularity of the Queen’s Beast Series of coins from the Royal Mint. Introduced in 2016, this 10-coin program has been a shining light for the Royal Mint with strong sales across both the bullion and proof versions with each new release. The latest design in this series that catalogs the heraldic beasts presented in statue form at the coronation of Queen Elizabeth II is the Falcon of the Plantagenets. Available in the impressive range of coins previously offered with other releases, now’s your chance to dive deeper and learn more about the next exciting release in the Queen’s Beast Series. 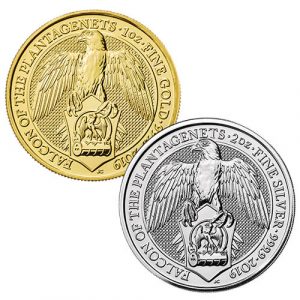 The Falcon of the Plantagenets

The White Falcon of King Edward III was the king’s official symbol for his seal. Edward III was a fan of hawking and falconry, and the choice of a white falcon in his seal was a natural one as a result. Edward III’s crest included a white falcon, but it was also popular with his great-great-grandson King Edward IV. Later on, monarchs from the House of York and House of Lancaster, known as cadet houses of the Plantagenets, also espoused a love for the falcon and fetterlock designs first introduced by Edward III.

During Queen Elizabeth II’s coronation in 1953, the white falcon present at the ceremony held a shield with its left claw. Upon that shield was a second white falcon which clutched an open fetterlock in its claws. The fetterlock, when used in an open position, indicates a monarch’s legitimate claim to the throne of England.

Design of the 2019 White Falcon Coins

On the reverse side of the 2019 British Queen’s Beast Falcon of the Plantagenets Coins, you’ll find the image of a powerful white falcon standing above the shield with its claws perched on the top of the shield. The shield features a second white falcon clutching an open fetterlock, symbolizing Queen Elizabeth II’s rightful claim to the throne of England.

The obverse face of 2019 British Queen’s Beast Falcon of the Plantagenets Coins include the fifth-generation effigy of Queen Elizabeth II. This design was created in 2015 by Jody Clark and debuted on British coinage starting in 2016. The Queen is depicted at the age of 89 and wears the Royal Diadem diamond crown as shown previously in the third-generation portrait (1985-1997) by Raphael Maklouf.

The Royal Mint’s investment-grade offering in the Queen’s Beast Series consists of three different metal choices and a variety of weights. As was the case in previous releases, there are no mintage caps on the bullion versions of the coin. The available weights are listed below, along with packaging information for each:

The Royal Mint will eventually launch the Falcon of the Plantagenets coin design in the additional 10 oz silver option and 1 oz platinum option as well, though these releases are delayed compared to these three primary weights in gold and silver.

At the same time the Royal Mint releases its bullion coins, collectors can also get their hands on the proof versions of the Falcon of the Plantagenets design. The proof versions of the coin have greater variety in terms of available weights, but have much lower mintage figures with the Royal Mint strictly controlling the number of coins issued. Additionally, proof coins are only available in gold and silver. The Proof 2019 White Falcon Coins are listed below:

The proof coins all have frosted design elements and mirrored background fields. Each coin is individually packaged inside of a protective capsule which is housed within a Royal Mint display box. Most come in a standard black or royal blue display box, but the larger 1 Kilo coins are available in wooden display boxes. Each individual coin comes with its own Certificate of Authenticity as well. The highest mintage figure in the proof range is 5,500 for the 1 oz silver coin, while the lowest is just 10 for the 1 Kilo gold coin.

Who were the Plantagenets?

The Plantagenet Dynasty produced 14 monarchs for the throne of England stretching from Henry II’s rise to the throne in 1154 to the end of the direct line in 1485 with the death of King Richard III in battle. The dynasty is typically divided in British history into three segments. The first Plantagenets, known as the Angevins, ruled from 1154 to 1216 and included Henry II, King Richard I the Lionheart, and King John I.

Get Your 2019 Falcon of the Plantagenet Coins from JM Bullion

All of the primary releases of the 2019 Falcon of the Plantagenet coins are currently on sale (or pre-sale) right now through JM Bullion. We encourage you to continue watching our blog each week for updates such as these on new coin releases or upcoming collections. You can also follow us on Facebook to get daily updates from JM Bullion.