Most of the time, sovereign and private mints around the globe are competing for the attention of investors and collectors. With a new 2-coin silver bullion release, the United States Mint and the Royal Canadian Mint have come together for the first time to offer two of the world’s best-selling silver coins in one limited-issue set. The Pride of Two Nations Silver 2-Coin Set offers beautiful, one-time versions of the 2019 American Silver Eagle and 2019 Canadian Silver Maple Leaf together for collectors to purchase, but there’s no time to waste in buying this silver set.

The Royal Canadian Mint sold out its entire allotment of 10,000 coin sets already. An impressive feat in and of itself, the United States Mint experienced massive demand for the sets as well. First day sales of the US Mint sets hit 74,054 out of the total 100,000 sets available from the US mint. 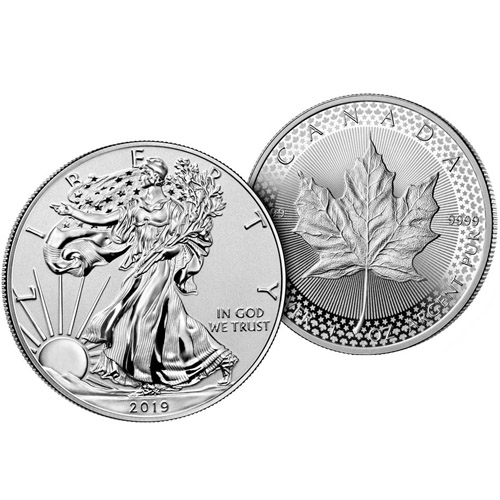 However, these are not your average bullion or proof versions of either coin. The United States Mint and the Royal Canadian Mint took special strides to produce visually stunning coins to make this set a one-of-a-kind collectible item.

The 2019 American Silver Eagle in this set bears the image of Walking Liberty on the obverse side as designed in 1916 by Adolph A. Weinman. On the reverse of the Silver Eagles is the heraldic eagle of the United States, a symbol as old as the nation itself and one which was modified in 1986 for this coin series by John Mercanti.

Each American Silver Eagle in the set is considered an enhanced reverse proof. These coins have multiple frosted and polished regions that isolate certain design elements to create stunning contrast. Overall, the coins have mirrored design elements and matte background fields.

Each of the Canadian Silver Maple Leaf coins in this set is considered a modified proof. The Royal Canadian Mint used matte design elements and mirrored background fields to create a modified proof with three times the visual brilliance and contrast of a typical proof. Additionally, the RCM applied a border design to both sides of the Silver Maple Leafs that consists of stars and maple leaves as symbols of the two nations.

The coins in the Pride of Two Nations Silver 2-Coin Set were independently produced by the respective sovereign mints. The Royal Canadian Mint produced the Canadian Silver Maple Leaf coins at the Ottawa Mint facility and did not issue mint marks. The United States Mint produced the American Silver Eagles in the set at the West Point Mint and included “W” mint marks on the reverse.

Presentation Packaging for the Pride of Two Nations

As mentioned earlier, the total mintage for the set was 110,000 in total with most of those going to the United States Mint for distribution. Both mints packaged the coins in their own presentation boxes and offered a Certificate of Authenticity. The 2019 US Mint Pride of Two Nations Silver 2-Coin Sets are housed inside of a blue US Mint display box, with each coin individually encapsulated. Inside the lid there is a COA that includes the American flag on the left and the Canadian flag on the right. This matches the position of the two coins in the box.

The Certificate of Authenticity offered by the United States Mint with its sets is unique in that it is the first-ever COA in the history of the mint that is bilingual. The COA is signed by US Mint Director David Ryder and Royal Canadian Mint CEO Marie Lemay, and features both English and French text.

These sets have sold incredibly quickly in direct-from-mint sales. As we mentioned, the Royal Canadian Mint has already sold its entire allotment of 10,000 sets and 75% of the US Mint sets are gone as well. You can still find these sets available from JM Bullion, so be sure you get a chance to add this to your collection. You can reach out to us with questions at 800-276-6508, chat with us online, or email us. Don’t forget to follow us on Facebook and check-in each week with our blog for the latest information on new coin releases.