The Niue Hawksbill Turtle Continues in its 2nd Decade

The precious metals market is full of options for those investors who buy silver on an annual basis. While the market is dominated by the likes of the American Eagle, Canadian Maple Leaf, British Britannia, Chinese Panda, and coins of the Perth Mint, there is another annual release out there that catches the eyes of investors. Like the coins of the Perth Mint, it represents the South Pacific. Unlike those coins, it comes from the private New Zealand Mint and has proven popular with buyers. The Niue silver coins in the Hawksbill Turtle Series have been available since 2010 and are now powering forward into a new decade in 2021. 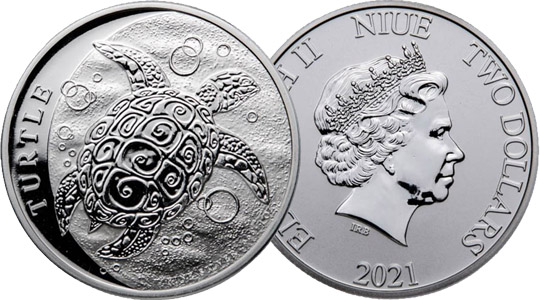 On the obverse side of the 2021 1 oz New Zealand Silver $2 Niue Hawksbill Turtle Coins is an effigy of Queen Elizabeth II. Her Majesty is depicted here in the still-popular portrait from Ian Rank-Broadley. This design shows the Queen in right-profile relief wearing the Girls of Great Britain and Ireland Tiara on her head. Used by the Royal Mint of England from 1998 to 2015, the design has been popular on Australian, New Zealand, Tuvalu, Tokelau, and Niue coins since 1999.

Similar to many other silver bullion coin collections, the 2021 New Zealand Silver Niue Hawksbill Turtle comes with a depiction of the hawksbill turtle. A species of sea turtle from the South Pacific, the hawksbill is known for its overlapping tiles of the shell that form its protective shell. The shell is also known for its brilliant pattern and colors. The design on the reverse of the coins features the turtle as it swims through the waters of the South Pacific, with bubbles included within the design field capturing the feel that the turtle is underwater.

The 2021 1 oz New Zealand Silver $2 Niue Hawksbill Turtle Coin is available in Brilliant Uncirculated condition. Coins in BU condition have never been circulated, but can show minor flaws from the coining process that include minor contact marks, scuffs, or other small flaws. The coins in this series ship individually in plastic flips or in tubes of 20 coins. The coins come with a face value of $2 backed by the government of Niue and boast 1 Troy oz of .999 pure silver. Each coin is a product of the New Zealand Mint.

History of the Niue Hawksbill

The Niue Hawksbill has existed in its current form for less than a decade. The coins were first issued for the nation of Niue in 2014, but the design itself is older than the current Niue Hawksbill Series. In 2010, the New Zealand Mint introduced the collection for the island nation of Fiji. Then known as the Fiji Taku, the series offered the same design you’ll find on the coins now, with two major exceptions. Where you’ll find “Turtle” on the reverse of these coins, you would have found the word Taku on the original 2010-2013 issues. Additionally, the 2010-2013 versions of the coin had Queen Elizabeth II on the reverse from 2010 to 2012, but the Fijian coat of arms in 2013.

If you’re ready to add a new form of silver bullion to your portfolio, the Niue Hawksbill is a great choice. If you have any questions, please feel free to ask. JM Bullion customer service is available to assist you at 800-276-6508, online using our live chat, and via our email address. You can also follow us on Facebook and read our weekly blog posts for more information on our new coin offerings.