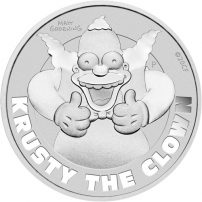 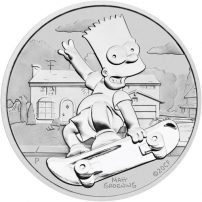 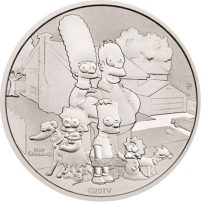 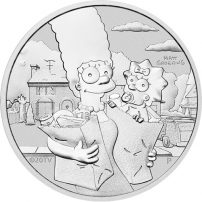 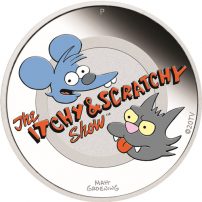 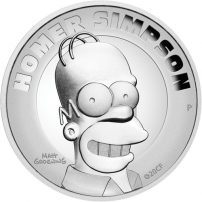 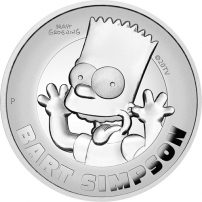 There is no arguing the fact that The Simpsons is the most popular animated television show of all time. Nothing remains on television these days unless eyeballs are tuning in week after week and season after season. Such has been the case of The Simpsons as the American animated icon grew from a simple 30-second sketch cartoon on The Tracey Ullman Show in 1987 into a 30-minute animated series that has been on television year after year since 1989. Today, the Perth Mint is celebrating the 30th anniversary of the beloved animated comedy with a wide range of Simpsons-themed, officially-licensed silver bullion coins. Explore what awaits at JM Bullion.

The first and most robust series of Simpsons Silver Coins released to date is the Simpsons Character Series from the Perth Mint. Issued on behalf of the nation of Tuvalu, the limited-edition collection focuses on the five primary characters that make up the Simpsons family in the animated series. This includes the patriarch Homer, mother Marge, and the children: Bart, Lisa, and Maggie.

Each of the coins released in this series ships individually inside of a clear acrylic case that allows you to view both the reverse and obverse designs of the series without removing the coin from its protective packaging. There is a colorized design of the character represented in each release on the reverse field. The coins each come with a Certificate of Authenticity from the Perth Mint, have a limited mintage of 5,000 coins per design, and ship complete inside of a Simpsons-themed shipping sleeve.

All of the obverse designs in this release are the same, that of Queen Elizabeth II. This is the 1998 design of Queen Elizabeth II in right-profile relief that first debuted on Royal Mint of England coins and later disseminated to Commonwealth coins through the Perth Mint and other facilities. It depicts the Queen in right-profile relief wearing the Girls of Great Britain and Ireland Tiara on her head. Inscriptions on this face of the coin include “Queen Elizabeth II,” “1 oz 9999 Ag,” “2019,” and “Tuvalu 1 Dollar.”

For the reverse field, this series features five distinctive designs:

In response to the popularity of the Character Series, the Perth Mint has a number of other silver coins available to collectors. Some are standard bullion coins, while others are beautifully colorized proofs similar to the Character Series. Other options from the Simpsons-themed universe of silver bullion include:

All of these silver coins are in-stock now with JM Bullion and ready to join your collection. Each one was produced by the Perth Mint, the oldest operating mint in Australia. If you have any questions, JM Bullion customer service is available to answer those inquiries. Please call us at 800-276-6508, chat with us live online, or simply send us an email with your inquiries.