When it comes to investing in silver bullion coins, investors and collectors are familiar with the well-known circular format. Just like circulation currency around the world, bullion coins from sovereign and private mints are predominantly struck as round blanks with beautiful designs engraved. The East India Company is now issuing new rectangular silver bullion coins on behalf of the island of St. Helena in the Atlantic Ocean. The historic connection between the East India Company and the island of St. Helena continues on in the 21st century with these beautiful new rectangular silver coin options. 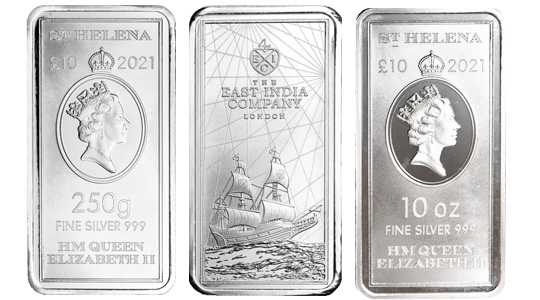 Available as a 2021 10 oz St. Helena Rectangular Silver East India Company Coin and 2021 250 Gram St. Helena Rectangular Silver East India Company Coin, these new silver bullion coins boast a beautiful obverse design that captures an effigy of Queen Elizabeth II. Both coins have an ornate portrait field at the center that is topped by the Imperial State Crown of England with a right-profile effigy of Queen Elizabeth II at the center. This portrait is based on Raphael Maklouf’s 1985 depiction of the Queen has long been considered one of the more idyllic depictions of the Queen as it captured here in a very regal pose. This side of the coin comes with a date mark, face value, nation of issue, and the weight, purity, and metal content of the coin.

In the reverse field of both 2021 St. Helena Rectangular Silver East India Company Coins, the design captures a sailing vessel on calm waters. The East India Company was established in 1600 with a Royal Charter granted to the company in 1601 by Queen Elizabeth I. The company operated a massive network of sailing vessels that connected the British Isles with the emerging reach of the empire in the Indian Ocean. By the early 1800s, sailing vessels like the one featured on the reverse of these rectangular coins helped the East India Company control half of the world’s trade, moving commodities like cotton, silver, indigo dye, salt, and spices between the Indian Ocean and the ports of England and Western Europe.

History of the East India Company

The East India Company was operational from its founding in 1600 until its dissolution by the British Crown in 1873. The company was responsible for initial British colonization of the Indian Subcontinent and the opening of Chinese ports to outside trade during the Opium Wars in the late-19th century. When it comes to coining, the East India Company has an equally rich history.

The first voyage of East India Company vessels in 1601 included cargo that consisted of 6,000 Pound sterling of specially-issued silver coins with an effigy of Queen Elizabeth I. The East India Company was the first-and-only international company with the authority to issue its own coinage. In fact, its colonization of the Indian Subcontinent set the foundations for a currency system that would remain in place in India until it gained its independence from Britain in 1947.

Though Europeans had previously set foot on St. Helena, it was the East India Company that was responsible for populating the island. It was ideally situated between the ports and colonies of the East Indies and the British Isles, offering a suitable port for East India Company vessels to use as a refueling and resupply stop when traveling between the British Isles and the East Indies. In fact, in 1821 it released the first-ever local coins in St. Helena with a batch of 700,000 coins in the Half Penny denomination.

St. Helena silver rectangular coins represent a great option for silver coin and silver bar investors alike. If you have questions, please feel free to contact JM Bullion customer service. Our team can assist you at 800-276-6508, online using our live chat, and via our email address. Remember to follow us on Facebook and read our weekly blog posts for more information on new and upcoming releases.