Get Prehistoric with the Congo Gigantopithecus Release

Modern humans like to think of themselves as the epitome of an advanced, sophisticated lifeform. While there is a great deal of scientific and religious debate around the origins of mankind, it is quite clear that even during the last several thousand years, human civilizations have undergone evolutions and changes. It is difficult to contemplate millions of years of Earth’s history, and the reality that prehistoric life existed on this planet. Creatures such as Gigantopithecus are a perfect example of prehistoric life that existed so long ago that humans weren’t even around yet to lay eyes on these beasts. A new Congo silver coin is available with a colorized depiction of creatures from the prehistoric world. 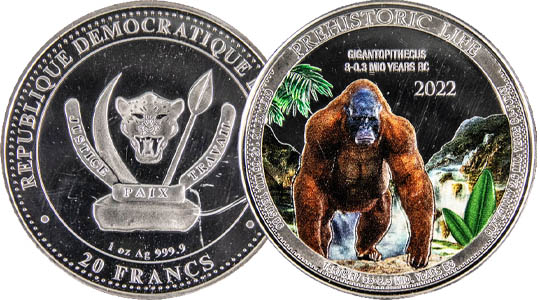 In the reverse design of the 2022 1 oz Congo Silver Gigantopithecus Coin, the mint offers a colorized image of the prehistoric ape known as Gigantopithecus. Now believed to be related to the modern orangutan, Gigantopithecus is shown here with a rich, red-brown fur covering his body and blue-gray skin on his face. The massive beast is walking on all fours with a body similar to that of the modern gorilla. The background shows a lush, prehistoric jungle region with cascading waterfalls in the background and lush foliage in the foreground.

For the obverse field of 2022 Congo Silver Gigantopithecus Coins, you will find the coat of arms of the Democratic Republic of Cong. This design is based on several past iterations of the national seal. It depicts the head of a leopard in front-facing relief at the center with an elephant tusk on the left and a tribal spear on the right. These elements are set above a slab of stone with a banner in between that offers the motto of the nation, Justice, Paix, Travail.

As with other issues in the Prehistoric Life Series, these silver coins are available in Brilliant Uncirculated condition with a face value of 20 Francs backed by the Democratic Republic of Congo. This is the seventh design in the Prehistoric Life Series and it comes with a limited mintage of only 2,000 coins. Each coin in this series is packaged in a protective capsule for delivery.

Gigantopithecus is one of a number of extinct species of apes that have been discovered in the fossil record. This massive ape species is said to have lived between the Early and Middle Pleistocene Era. The lineage of the beast has been the subject of debate for decades. Some have suggested that Gigantopithecus was a hominin, placing it somewhere in the early lineage prior to modern homo sapiens. However, modern scholars now believe the Gigantopithecus to be more closely related to other apes and have suggested it is related to orangutans.

Bring Home a Piece of the Prehistoric World with JM Bullion

The Prehistoric Life Series continues and JM Bullion has the latest release available to you while supplies last. If you have any questions about these coins, please feel free to ask. Our customer service team is available at 800-276-6508, online using our live chat, and via our email address. Remember to check back with our blog each week for an in-depth look at upcoming and new releases, and follow us on Facebook for regular posts about our product lineup.