Escape the Grasp of the Empire in the Millennium Falcon

Generations old and new have escaped to a new universe watching Star Wars feature films and engaging with other forms of media surrounding the science-fiction franchise. Precious metals refiners have taken notice too. The New Zealand Mint produces the world’s leading Star Wars silver coin collection, with the latest installment featuring arguably the most famous starship from the franchise: the Millennium Falcon. 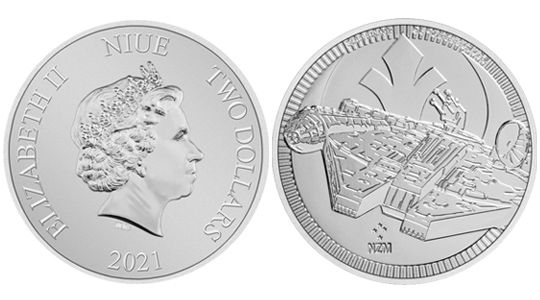 The reverse side of the new 2021 1 oz Niue Silver Star Wars Millennium Falcon Coin from the New Zealand Mint features a depiction of the cargo freighter turned fighter for the Rebel Alliance. The depiction showcases the Millennium Falcon with the Rebel Alliance logo in the background field. The mint mark of the New Zealand Mint is also featured on the reverse side of the silver coins. The Millennium Falcon was the most famous starship from the franchise. It featured in all three films in the original trilogy, the 1978 release of The Star Wars Holiday Special, all three films in the sequel trilogy from the 2010s, and made a cameo in 2005’s Revenge of the Sith. It also appeared in the Han Solo-focused standalone film Solo: A Star Wars Story.

On the obverse field of 2021 Niue Silver Star Wars Millennium Falcon Coins, you will find the iconic effigy of Queen Elizabeth II. Created in 1998 by Ian Rank-Broadley, this effigy of the Queen has featured on coins for Britain, Australia, New Zealand, Niue, the Cook Islands, and Tuvalu, among countless other Commonwealth nations. It depicts the Queen in right-profile relief with the Girls of Great Britain and Ireland Tiara. This design has been on coins for Niue, Tuvalu, and the Cook Islands since 1999.

As with other coins recently released by the New Zealand Mint in its Star Wars Series, the 1 oz .999 pure silver coins are available in Brilliant Uncirculated condition. Individual coins are packaged in plastic flips, while multiples ship in tubes of 25 coins or Monster Boxes of 250 coins. The Monster Boxes are themed with Millennium Falcon artwork and hold a total of 10 tubes of 25 coins each. The New Zealand Mint has limited the mintage of this design to 100,000 coins only.

The New Zealand Mint has been producing Star Wars-themed silver coins since 2015 when the new sequel trilogy of films hit theaters. The mint has released coins across series that include the Star Wars Classic collection, the Force Awakens Series, and the Rogue One Series. The Millennium Falcon is the latest release of standalone Star Wars coins that includes a long-running Darth Vader coin and a Boba Fett coin in 2020.

About the NZ Mint

Founded nearly five decades ago, the New Zealand Mint is the only privately-owned mint in the nation and is located in Auckland. The mint produces the highest quality of silver and gold bullion with purities of .999 and .9999, respectively. Though the mint produces a wide range of collectible and bullion coins for Pacific Ocean nations such as Fiji, Niue, Tuvalu, and others, it does not produce any banknotes or coins in the New Zealand dollar. National currency for New Zealand is produced by the Royal Mint of England and the Royal Canadian Mint on behalf of the Reserve Bank of New Zealand.

Keep Up with Star Wars Coins at JM Bullion

The Millennium Falcon release is not likely to last long. Recent Darth Vader and Boba Fett coins in this series have sold out with JM Bullion, so don’t wait. Please contact us at 800-276-6508, online using our live chat, or simply send us an email if you have any questions. Remember to follow us on social media and keep up with our weekly blog posts for more information on new releases and upcoming coins.