Last week, we featured the first-ever collaborative release of the United States Mint American Silver Eagle and the Royal Canadian Mint Canadian Silver Maple Leaf. This week there is another collaboration worthy of attention as it is available coinciding with the global events marking the 50th anniversary of the successful Apollo 11 moon mission launched by NASA in July 1969. The latest exciting additions to our collection of Apollo 11 silver include a proof black-nickel-plated coin from the Royal Australian Mint and a two-coin release featuring a RAM coin and a US Mint cupro-nickel release from its Apollo 11 collection. 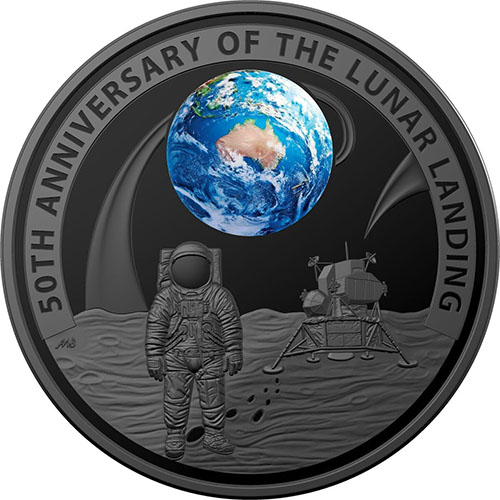 Capture the Darkness of Space with a Black-Nickel-Plated Proof

The 2019 1 oz Proof Australian Lunar Landing Domed Black Nickel-Plated Silver Coin does a brilliant job of juxtaposing the darkness of space with the bright, vivid nature of life on planet Earth. These coins have a layer of black nickel on the surface of both the obverse and reverse design elements. The release has a limited mintage of only 10,000 coins, and each one contains 1 Troy oz of .999 pure silver with a $5 (AUD) face value. The coins are housed inside of commemorative display boxes with a Certificate of Authenticity included.

On the reverse of the Proof Australian Lunar Landing Domed Black Nickel-Plated Silver Coin is a depiction of Neil Armstrong standing on the Moon near Tranquility Base with the Eagle lunar lander visible. Everything on this side has the dark-black finish, except for the brightly colorized depiction of planet Earth in the distance. Earth is aligned here to showcase the Australian continent. These domed coins have contrasting concave and convex surfaces, with the reverse bearing the convex, or domed, surface.

The obverse side of the coin features Queen Elizabeth II’s right-profile portrait based on Ian Rank-Broadley’s fourth-generation design for the Royal Mint of England created in 1998. This occupies only a small fraction of the design element in the low-center field. The remainder includes the Parkes radio telescope to the right as it points up toward the Moon on the left. This telescope was used to capture signals from the Apollo 11 craft on the Moon to transmit to the more than 500,000 people around the world watching the events unfold on live TV.

The same coin design offered in the black-nickel-plated proof release from the Royal Australian Mint is also available in its pure silver form alongside a cupro-nickel coin from the United States Mint in a 2-coin set. The 2019 Proof Australian Lunar Landing Silver and Cupro-Nickel 2-Coin Set includes the popular Apollo 11-themed designs from the two sovereign mints. The set has a limited mintage of 10,000 in total with a presentation case available for the coins that includes a Certificate of Authenticity bearing the logos of both the Royal Australian Mint and the United States Mint.

On the obverse and reverse of the 1 oz Australian Lunar Landing Silver Coin in this set, you’ll find the same designs as featured on the coin mentioned above. There is, however, no black nickel plating on this coin. It maintains its original silver brilliance and does still feature the colorized depiction of planet Earth on the reverse field.

The $1 Apollo 11 50th Anniversary American Coin in this set is the cupro-nickel silver clad coin the US Mint released in its broader Apollo 11 50th Anniversary collection. This domed coin features a concave obverse design field that features an astronaut’s footprint on the lunar surface and inscriptions of Mercury, Gemini, and Apollo along with four phases of moon depicted along the edge. On the reverse field, the convex, domed design includes an outline feature of Buzz Aldrin’s visor from his spacesuit helmet that captures in its field the reflection of Neil Armstrong, the American flag, and the Eagle lunar lander on the surface of the moon.

Saturday, July 20, 2019, marks 50 years to the day since Neil Armstrong and Buzz Aldrin touched down on the surface of the Moon for the first time in human history. The mission that captivated the world lifted off from Merritt Island, Florida, on July 16, 1969, and reached the Moon four days later. After spending some 21.5 hours on the lunar surface briefly exploring and collecting samples, Armstrong, Aldrin, and command module pilot Michael Collins all splashed down in the South Pacific Ocean on July 24, 1969. The Apollo 11 mission was the successful culmination of President John F. Kennedy’s challenge issued to the nation in 1961. Following a series of embarrassing defeats in the Space Race as the Soviet Union first launched Sputnik and then sent a human into orbit around the planet, President Kennedy challenged the nation to use its resources to put a man on the Moon and return him safely to Earth before the decade was out.

If you have any questions about the Royal Australian Mint and US Mint coins in this post or want to know about any other Apollo 11 silver we carry, please don’t hesitate to ask. JM Bullion customer service is available at 800-276-6508, online using our live chat, and via our email address. Stay up to date throughout the week by following us on Facebook and check in with our blog every Friday for new releases.