One of the most famous creatures to be depicted on Australian coinage is the kookaburra. The largest member of the kingfisher species has had its own place in Australian coining since 1990 as the leading silver bullion coin from the Perth Mint. Such a popular feature shouldn’t be reserved for just one type of collection, which is why the Perth Mint uses the popular bird in the third design of the 2 oz Mother and Baby Series of Perth Mint silver bullion coins. You won’t want to miss out on this design! 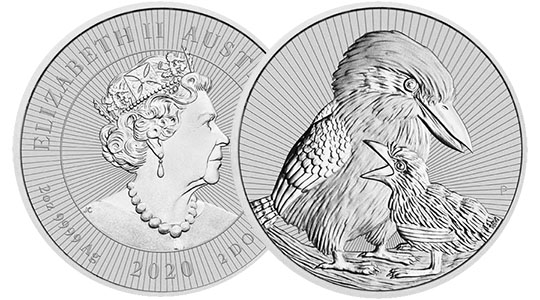 In the new 2020 2 oz Australian Mother and Baby Kookaburra Silver Coin release, the Perth Mint offers a distinctive new reverse design element focusing on the kookaburra and a manner never before depicted. On the reverse side of the coin, a mother kookaburra is standing very close to her young baby, with the small chick nestled in close to its mother. The chick’s mouth is open as if to signal to its mother it is hungry. The due is featured standing on a branch with radiating rays of sunshine dominating the background field.

The Queen’s Portrait on the Obverse

On the obverse side of the coin, the most interesting facet of the release is the Perth Mint’s use of that same radiating ray of light from the background as an added element to the design. In the foreground, Queen Elizabeth II is featured in right-profile relief in the sixth-generation Australian coin portrait of the monarch. Based on the Jody Clark design for the Royal Mint of England, the design is the first on an Australian coin since 1966 to include the Queen’s shoulders in the portrait. For this design, Clark depicts the Queen at the age of 89 (as she was in 2015) wearing the George IV State Diadem Crown. Commissioned by King George IV in 1820 in the first year of his reign, the State Diadem has 1,333 diamonds, as well as other precious gemstones, that weigh more than 300 karats. Inscriptions on this face of the coin include “Elizabeth II,” “Australia,” “2 oz 9999 Ag,” “2020,” and “2 Dollars.”

Details of the Mother and Baby Release

The 2020 Australian Mother and Baby Kookaburra coin is the third in the Mother and Baby 2 oz silver series. The designs in this series each have a limited mintage of 75,000 coins and are available for both individual and bulk purchases. The individual coins will ship in a protective plastic flip, while multiples of 10 come in mint tubes. Each coin has a face value of $2 (AUD) and the series is officially known as the Next Generation Series.

Buy While You Can!

The 2020 2 oz Australian Mother and Baby Kookaburra Coin is sure to sellout quickly given the current climate for precious metals and the popularity of this series as a whole. The debut 2018 Mother and Baby Koala and the 2019 Mother and Baby Crocodile coins are both sold out already. If you have any questions, contact JM Bullion customer service at 800-276-6508. You can also contact us online through our live chat and email address features. Don’t forget to follow us on Facebook and read our weekly blog for more information on upcoming coin releases.