Start an Ancient Collection with the Aztec Warrior Rounds

Some of the most popular pieces of silver for sale right now are rounds and bars with ancient design themes. While some product lineups focus on Ancient Egyptian Gods or artifacts the Aztec Calendar, other releases offer silver round designs with warriors from various regions of the world representing different periods in human history. The newly published Aztec Warrior rounds are an ideal example of unique design in a series that focuses on bygone eras. 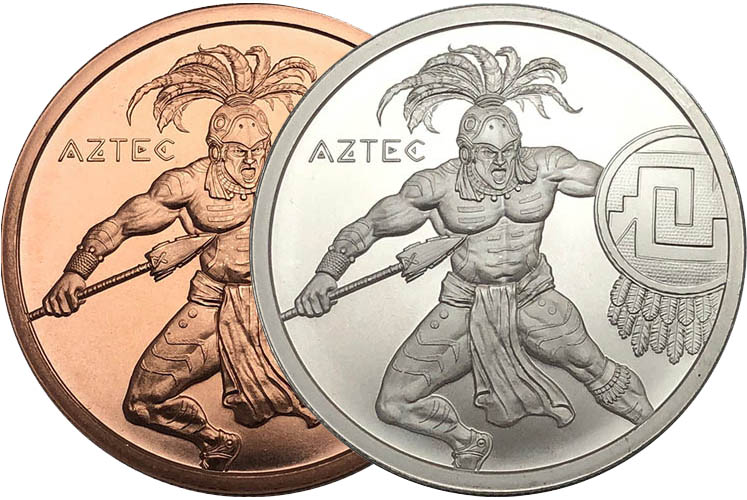 On the obverse side of Aztec Warrior Silver Rounds and copper rounds is a depiction of a fearless, powerful Eagle Warrior. Considered the elite forces of the Aztec Empire’s army, Eagle Warriors marched into battle with shields draped in the feathers of eagles and wielding long spears. While the warrior’s body is covered in war paint, his face is visible through the eagle helmet he wears. Eagle Warriors wore full helmets with the beak of an eagle on it and brilliant plumage to identify themselves as the elite members of the Aztec army.

The reverse face of the Aztec Warrior Copper Rounds and silver rounds comes with a common design for the Warrior Series at the Golden State Mint. The first issue in this collection focused on the famed Spartan soldiers from Ancient Greece. The reverse design continues throughout this collection in honor of the Spartans and features a Spartan helmet with a tall horse hair crest. This crest on the helmet was indicative of an individual’s status as an officer within the ranks of the Spartans. Behind the helmet, you will note the presence of the favorite weapons of the Spartans: the Dory spear, short sword, and battle ax.

The Aztec Warrior Rounds from the Golden State Mint have no mintage cap in either silver or copper versions. The silver rounds contain 1 Troy oz of .999 pure silver, while the copper rounds have 1 AVDP oz (.9115 Troy oz) of .999 pure copper. You can purchase the 1 oz silver and copper rounds individually inside of protective plastic flips, in mint tubes of 25, or in boxes of 500 rounds.

The Warrior Series comes from the Golden State Mint, a private American mint launched in 1974 by Jim Pavlakos. Based in Central Florida, the mint has enjoyed continued growth and is still a family-run operation with Jim’s son Andrew working to continue the impressive designs of Golden State Mint. The Warrior Series launched with the Spartan Warrior design, and the Aztec Warrior is now available as the second release in the collection.

By in large, the Aztec army was made up of peasants, farmers, and other laborers pressed into action by the Triple Alliance of Mexica city-states that formed the Aztec Empire. However, there were those members of the military within the empire held in greater regard. Eagle Warriors, such as those depicted on these rounds, and Jaguar Warriors were the elite forces of the Aztec Empire. Many young men from higher social classes in the Aztec Empire would train to become members of the Eagle or Jaguar Warrior classes. Similarly, peasants and farmers from the rank-and-file of the Aztec army who proved themselves in battle could earn a spot among the Eagle and Jaguar Warriors.

Eagle Warriors typically fought in groups alongside one another and dressed for battle as depicted on these rounds. Jaguar Warriors wore the full pelt of a jaguar on their bodies in battle and would often form the spearhead of the Aztec army fighting from the frontline alongside the regular units of the army.

Whether you already own Aztec and other ancient-themed designs or want to start a new collection focused on the ancient world, the new Aztec Warrior rounds are a great option. If you have any questions, please call us at 800-276-6508, chat with us live online, or email us directly. Don’t forget to check back with our blog each Friday for new features and follow us on Facebook for daily information.