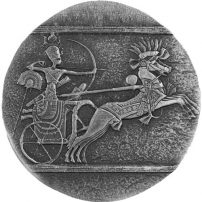 2020 5 oz Republic of Chad Egyptian Relic Series Chariot of War Silver Coin
As Low As:
Out of Stock

While most sovereign bullion coins in the precious metals industry today come from government-controlled mints around the globe, there are an increasing number of these programs originating from private mints that have contracts with smaller nations and governments. A perfect example of this partnership is the Scottsdale Mint. A private US mint, Scottsdale already has a contract in place with the nations of Congo and Fiji, and now adds to that with a truly unique offering.

In the all-new Egyptian Relica Series of silver coins, the Scottsdale Mint works in collaboration with the Republic of Chad to issue bullion coins celebrating the deities and famous figures from the cultures of Ancient Egypt. Launched in 2016, the series includes unique silver coins with two weights available and beautiful finishes to each design. Now’s your chance to learn more about this distinct collection of coins.

About the Egyptian Relic Series

The Egyptian Relic Series from the Scottsdale Mint is a sovereign-backed program that includes 2 oz silver and 5 oz silver options for those buying silver. Each of the coins in the collection features .999 pure silver content and face values in Francs backed by the Republic of Chad. The 2 oz coins have a face value of 1,000 Francs and the 5 oz coins have a value of 3,000 Francs.

All of the coins issued in the Egyptian Relic Series have common design elements. The physical appearance of the coins in this collection are distinct as each is produced on a rimless blank. The rough edges of the blanks and the antique finish gives the coins the appearance of chiseled granite, almost as though they were chiseled right out of an ancient tomb in Egypt. The antique polish provides a matte finish and makes each coin appear as though it was in circulation in the ancient world.

As the first release in the series, the 2016 5 oz Republic of Chad Egyptian Relic Series King Tut Coin celebrates the 12th pharaoh of the 18th dynasty in Egypt. The odd part of King Tut’s legend today is that he was largely lost to Egyptian history following his death. He had an extremely short reign as pharaoh, lasting just 9 years in total from the age of 10 to 19, and achieved little in the way of significant milestones as Egypt’s pharaoh.

He is best known for the immaculate condition in which his tomb was discovered in 1922. British archaeologist Howard Carter discovered the Boy King’s tomb that year and found his solid gold coffin completely intact, with Tut’s mummified remains inside. As his story unraveled over time, modern humans were amazed at this Boy King who led an empire.

The designs on the obverse side of the 2016 5 oz Republic of Chad Egyptian Relic Series King Tut Coin are inspired by actual hieroglyphics depicting King Tut. The only engravings on the obverse feature a right-profile image of the Boy King himself.

Flip the coin over and you’ll find the coat of arms for the Republic of Chad. The heraldic shield of the nation includes rays of sunshine emanating from the top, a horizontal zig-zag pattern across the shield, and a lion and goat on either side of the crest. Below it is a banner reading “Unite, Travail, Progres,” which is the national motto for the country. Engravings include the nation of issue, weight, metal content, purity, year of issue, and face value of the coin.

Horus is one of the most revered figures in Ancient Egypt. Believed to have been an early pharaoh of Egypt, he would go on in death to become a god to the Egyptian people. He was often depicted as a man with a falcon’s head ad was the national tutelary deity of the ancient Egyptians. His symbol became one of kingship over the entire kingdom of Egypt, and he was worshipped from the early days of prehistoric Egypt through the period of the Ptolemaic Dynasty and Roman control of Egypt.

The obverse design of the 2016 Horus Silver Coins has a left-profile vision of a male figure with a falcon’s head. Like the earlier King Tut release of 2016, the Horus Silver Coin had a 2 oz silver weight with a chiseled granite edge.

The most recent release in the series was the 2017 Queen Nefertiti Silver Coin. Nefertiti was arguably the most powerful woman of the ancient world. She is believed to have lived from 1370 BC until 1330 BC and remains to this day a cultural icon of female beauty. The first images of her bust were discovered in 1912 and that hieroglyph has become a symbol of Ancient Egypt that endures to this day.

On the obverse of 2017 Queen Nefertiti Silver Coins, you’ll find a right-profile bust of Nefertiti with hieroglyphs in the background and secondary left-profile hieroglyph visible just off the Nefertiti’s nose in the main design element.

The 2017 Ramesses Silver Coins in the Egyptian Relic Series feature two distinct releases from the Scottsdale Mint. The pharaoh Ramesses II of Egypt ruled over the Egyptian kingdom longer than Queen Elizabeth II has reigned over England as the longest-ruling modern-day monarch. Ramesses II reigned for 70 years and his rule shaped every part of Egyptian life, from culture and religion to the physical restoration of the kingdom’s borders. He brought in a new era of peace, prosperity, and security, as well as global outreach.

The coins in the 2017 Ramesses Silver release featured 2 Troy oz of .999 pure silver and had individual mintage caps of 25,000 coins. As with the King Tut release, the coins are individually housed inside of Egyptian Relic-themed boxes. Unlike the King Tut coins, there is no bulk option for the Ramesses II coins.

About the Republic of Chad

The Republic of Chad is a landlocked country in north-central Africa. Known as the “Dead Heart of Africa,” Chad is bordered by six other nations and is the fifth-largest country on the continent. The nickname for the country is based upon its largely harsh, arid desert climate. However, there are actually several regions within the country that include the edge of the Sahara Desert in the north, the arid Sahelian belt in the center, the fertile grounds of the Sudanian Savanna in the south, and the region around Lake Chad which is the largest wetland in the country and second-largest in Africa.

Background on the Scottsdale Mint

Based in the suburban Phoenix city of Scottsdale, Arizona, the Scottsdale Mint is a private minting company that produces silver and gold bars, silver rounds, and also silver sovereign coins under contract for other nations. It does not produce American coinage as that is the exclusive responsibility of the United States Mint.

Scottsdale Mint is an ISO 9001-2008 certified company, and many of its hallmarked products are available for use in Precious Metal IRA accounts. Most importantly in the modern era, Scottsdale Mint is committed to environmentally responsible sourcing of its bullion. In particular, a portion of its silver bullion is sourced as recycled material from the photographic and manufacturing industries.

If you have any questions about the beautiful antique silver coins for sale in this series, please don’t hesitate to contact JM Bullion. Our customer service team is available to you at 800-276-6508, online using our live chat, and via our email address.