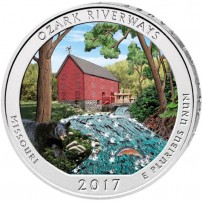 The America the Beautiful coin program from the United States Mint has been impressive since its introduction in 2010. Following up on the success of the state quarters program released on circulation currency in the 1990s, America the Beautiful coins have seen increased demand with each new set of coins released. Now, there is a brand-new look coming to these popular ATB Coins courtesy of a commemorative coin dealer in Germany. JM Bullion now offers Colorized ATB Silver coins for investors and collectors seeking unique products.

About the ATB Coin Series

The United States Mint produces America the Beautiful coins in both uncirculated and bullion versions on an annual basis. The coins have a number of common features, such as a shared obverse design, .999 pure silver content, and a face value of $.25 (USD) backed by the federal government. However, there are important differences between the coins that help you identify an uncirculated coin and a bullion coin. These differences include:

America the Beautiful Coins to Date

The American the Beautiful quarters program started in 2010 and is scheduled to run through 2021. The mint will release a total of five new designs each year, with the reverse of each coin featuring a new design that represents a national park, national forest, or historic monument from a representative state or jurisdiction.

Coins released to date include the following states and years of release:

There is no change to the physical design set, purity, or content of the America the Beautiful coins. Instead, Colorized ATB Silver coins have been improved on the reverse design with the addition of natural coloring that gives the image of each national park, national forest, or historic monument a real-world appearance.

Colorization of the images on the reverse takes place at Emporium Hamburg in Germany after the coins are minted and distributed to dealers. The obverse image of President George Washington remains unaltered, and maintains its silver finish and appearance. On the reverse of each coin, natural colors have been added only to the inner design circle.

For example, the 2019 ATB Lowell National Historical Park Silver Coin has a colorized reverse design that depicts a woman working at a power loom in one of the many textile mills that dotted the American Northeast during the Industrial Revolution. Colorized versions of each design in the America the Beautiful Series date back to the initial releases in 2010, but the availability of Colorized ATB Coins today varies based on the date of issue. Examples of coins more readily available in the colorized range include the following:

Why is Colorization Added at Emporium Hamburg?

The United States Mint does not add color or otherwise alter the finish of any of its products. Emporium Hamburg is one of the world’s leading coin trading houses and is a supporting partner of banks, dealers, and coin collectors around the world. The company has helped coin collectors and precious-metal enthusiasts diversify their investment portfolios for more than 40 years.

When you decide to purchase a Colorized ATB Silver Coin from JM Bullion, you have multiple payment methods available to complete your transaction. We accept major credit/debit cards with a processing time of one business day on average. Paper checks and ACH are accepted by JM Bullion, with an average of four to six days to process. We now also accept bank wire transfers, Bitcoin, and PayPal fund transfers. Those paying by paper check, ACH, or bank wire enjoy a 4% discount on the total purchase price.

All shipments from JM Bullion are packaged and shipped in discreet packaging to protect the identity of your products. JM Bullion proudly offers free standard shipping and insurance for your Colorized ATB Silver Coins. If you’d like expedited shipping, it is available for an additional fee. All packages ship via the US Postal Service or UPS. If your shipment is lost, we’ll work with the carrier to recover your package. If it is damaged or stolen, we’ll work to provide you with a replacement product or refund your money in full.

If you have any questions about Colorized ATB Silver coins, please feel free to reach out to JM Bullion. Our associates are available on the phone at 800-276-6508, online using our live web chat service, and via email.