Incuse designs are rarely used by mints when coining regular-issue bullion coins. For that matter, few coins are released annually that include an incuse strike on proof versions. Before you buy the 2018 1 oz Canadian Silver Incuse Maple Leaf Coin from JM Bullion, learn a little bit more about the coin series’ history, the incuse strike style, and the details of this beautiful commemorative design.

The Royal Canadian Mint offers the 2018 1 oz Canadian Silver Incuse Maple Leaf coin for purchase as individual coins or in bulk options. The bulk options include mint tubes of 25 coins or Monster Boxes of 500 coins. The 2018 Silver Incuse Maple Leaf is a first-ever double-incuse strike from the mint. On the reverse side of the coin, the image of the sugar maple leaf is struck with an incuse style to sink it into the surface of the blank during coining. Flip it over to the obverse, and for the first time in Royal Canadian Mint history the effigy of Queen Elizabeth II has been struck in an incuse style as well. 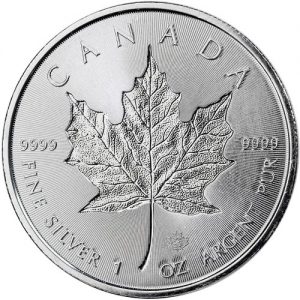 The iconic sugar maple leaf design is featured on the reverse as it has since the 1979 introduction of the Gold Maple Leaf coins. This design from Walter Ott has been reproduced countless times on the Silver Maple Leaf, the Platinum Maple Leaf, and the Palladium Maple Leaf with no changes to its appearance during the mint’s illustrious history with this series.

On the obverse is the image of Queen Elizabeth II. This design represents the fourth-generation effigy of Queen Elizabeth II on Canadian coinage. It was created in 2003 by Susanna Blunt. This design made Blunt just the second Canadian artist to ever design the Queen’s effigy during her reign as the Queen of England. The previous, third-generation design was also developed by a Canadian artist.

Each of these 2018 1 oz Canadian Silver Incuse Maple Leaf coins also features three of the Royal Canadian Mint’s latest anti-counterfeiting design elements. The reverse face of the coin as the micro-engraved maple leaf privy mark. Viewed under magnification, this maple leaf has the year of issue’s last two digits included in the center: “18.” Both sides of the coin have precisely engraved radial lines in the background, and the new Bullion DNA program is also in use on these coins.

The coins in the 30th anniversary Silver Incuse Maple Leaf strike are in BU condition. Coins in this condition show no signs of wear and tear, though it is possible for minor flaws to exist. These flaws are limited to breaks in the luster, spotted surfaces, or contact marks as a result of the production process.

What is an Incuse Striking?

The term “incuse” is a classical Latin term that refers to a hammered or stamped-in design. The actual Latin term was “incusus” or “incudere,” meaning “to forge with a hammer or to strike in.” When it comes to coins, incuse is used to define coin designs which are stamped into the surface of the blanks during coining. Rather than striking a blank during production to create a raised design field on the end product, the striking die itself has a raised element that stamps the eventual design down into the surface of the coin.

This convex design field creates a different visual element for the end product, changing the way light hits and refracts from the sunken design field. As mentioned above, this is the first time in Royal Canadian Mint history that the Queen’s effigy has been struck with an incuse element, which means this is also the first-ever double-incuse coin from the mint.

Much like the American Eagle, the Canadian Maple Leaf is not just one coin, but a series of coins. The Royal Canadian Mint’s Canadian Maple Leaf coins hold special status in the precious metals market. The Canadian Gold Maple Leaf was the first introduced when it debuted in 1979, and when it was offered for the first time it became just the second-ever gold bullion coin for private investors. The first was, of course, the South African Gold Krugerrand.

Nearly a decade later, the mint introduced the Canadian Silver Maple Leaf. In 1988, the mint unveiled the Silver Maple Leaf with the same design elements and features of the Canadian Gold Maple Leaf. Though it wasn’t the first major silver bullion coin in the world, arriving two years after the Chinese Silver Panda and American Silver Eagle, it was the first silver bullion coin to feature .9999 pure silver content. Today it remains among only a handful of annual release coins to use .9999 pure silver. Canadian Maple Leaf coins were also among the first in the world to offer investors an option in gold, silver, platinum, and palladium.

Throughout its 30-year history, the Silver Maple Leaf has maintained the same design elements on the reverse since it was introduced in 1979. Ott’s design of the maple leaf has only ever been slightly updated to reflect modern design, with the actual sugar maple leaf design itself remaining unchanged in the nearly four decades the Gold Maple Leaf has been available.

For the obverse designs, the mint is currently on its third portrait of Queen Elizabeth II to feature on the Silver Maple Leaf. When the coins debuted in 1988, the second-generation portrait of Her Majesty created by Arnold Machin was in use on all Canadian coins. Starting in 1990. The third-generation portrait debuted from Dora de Pedery-Hunt. This marked the first time a Canadian artist had created an effigy of the Queen for the nation’s coinage. Currently, Susanna Blunt’s fourth-generation depiction of Queen Elizabeth II graces the obverse of all Canadian coins.

Background on the Royal Canadian Mint

Originally founded in 1908, the Royal Canadian Mint has today grown to become one of the world’s preeminent sovereign mints. The Royal Canadian Mint operated for nearly 70 years with only its original Ottawa coining facility. In 1976, a secondary mint location opened in Winnipeg, nearly 16 years after the government was advised of a need to expand capacity. Today, the royal Canadian Mint strikes more than 1 billion coins annually. In addition to its popular Canadian Maple Leaf series of gold, silver, and platinum bullion coins, the mint also strikes currency for as many as a dozen other countries.

The 2018 1 oz 30th Anniversary Canadian Silver Incuse Maple Leaf is currently available for pre-sale from JM Bullion. This special 30th anniversary coin is only going to be available during the Royal Canadian Mint’s celebration year for the Silver Maple Leaf, so don’t wait! Remember to follow our blog for weekly news and updates on coins, metals, and other exciting information in the precious metals world. We’re also on Facebook, so connect and chat with us there as well!