One of the most coveted coin programs of the modern era is the Lunar Series II collection from the Perth Mint. Launched in 2008, the Lunar Series II collection follows the 12-year cycle of the Chinese lunar calendar. Each of the 12 animals featured on the Zodiac is depicted on gold and silver bullion coins in this series. The popular follow-up to the original Lunar Series, the collection comes to a conclusion in 2019 with the Year of the Pig coins. Learn all about the upcoming 2019 Australian Pig Coins now! 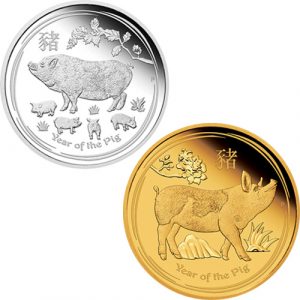 The Perth Mint of Australia offers the final coin in its Lunar Series II collection with the 2019 Australian Pig Coins. The bullion coins in the series include silver and gold coin options for investors and collectors to choose from when shopping. Both the silver and gold versions feature .9999 metal purity with face values in Australian dollars (AUD) backed by the federal government of Australia.

In total, investors have a total of 15 coins to choose from in the bullion series. The 2019 Australian Silver Pig Coins come with seven options:

There are only two coins in the 2019 Australian Silver Pig offering with mintage caps. The 1 oz silver coin is limited to just 300,000 coins and the 10 Kilo coin is limited to just 100 coins. The remainder of the Australian Silver Pig coins have an unlimited mintage figure, which means Perth Mint will strike the coins through the end of December 2019.

For the 2019 Australian Gold Pig coins, there are a total of eight different options that include:

Similar to the Australian Silver Pig, the Australian Gold Pig coins have unlimited mintage figures for most of the coins. The only coin with a set mintage cap is the 1 oz gold coin, which is capped at just 30,000 coins in total.

Bullion versions of the coin are all individually housed in protective plastic. Multiples are available for fractional weights, with both silver and gold options typically shipping inside of sealed rolls of 20 coins. Only the 1 oz coins in both weights are available with Monster Box options.

The 2019 Proof Australian Pig Coins ship inside of individual Perth Mint clamshells. All coins come with an individual Certificate of Authenticity, and the three-coin sets ship in a three-coin clamshell to easily house and display all three coins.

Design of the 2019 Australian Pig Coins

The 2019 Australian Pig Coins from the Perth Mint feature designs from Ing Ing Jong. A Perth Mint designer and artist since 2011, Jong continues with the use of separate imagery for the silver and gold coins in this release. The 2019 Australian Silver Pig coins have the image of a sow in left-profile relief with four of her piglets in the foreground playing around on the reverse. Included inscriptions read “Year of the Pig,” the “P” mint mark of the Perth Mint, and the Chinese symbol for pig.

On the reverse of the 2019 Australian Gold Pig Coins, Jong features only a large adult pig in right-profile relief. Similar to the silver coins, you’ll find inscriptions of “Year of the Pig,” “P” for the Perth Mint, and the Chinese symbol for pig on the reverse side of the coins. Like many proof coins, the Proof Australian Pig coins have frosted design elements and mirrored background fields.

The obverse face of the 2019 Australian Pig Coins brings another conclusion beyond that of the Lunar Series II collection. Since 1998, Queen Elizabeth II’s fourth-generation portrait has featured on the obverse of most British and Commonwealth coins. The Royal Mint introduced the new fifth-generation portrait from Jody Clark to British coins in 2016. For all major 2019 Perth Mint coins, the Jody Clark design is coming to the obverse. However, to keep the 2019 Australian Pig Coin similar to the 11 preceding releases in the collection, the Perth Mint will use the fourth-generation design of Her Majesty for one final time.

The Perth Mint and Lunar Coins

The Perth Mint is Australia’s oldest operating mint. Opened in 1899 as the third and final Royal Mint location on the continent, the Perth Mint continued operations through the federation period in Australia and served along with the Melbourne Mint for six decades as de facto government mints in Australia. In 1965, the Currency Act of 1965 established the Royal Australian Mint in the federal capital of Canberra and lead to the eventual closure of the Melbourne Mint. Today, the Perth Mint is owned by the government of Western Australia and enjoys legal tender status for its coinage.

Get Your 2019 Australian Pig Coins from JM Bullion!

You can purchase your 2019 Australian Pig coins from JM Bullion, and watch for the proof coins to arrive in the weeks ahead. We encourage our readers to come back each week and check in with the blog, or follow us on Facebook to learn about the latest coin releases and newest posts on our blog.