The America the Beautiful collection of silver coins from the United States Mint has delighted investors and collectors since its release in 2010. The massive 56-coin series debuts five new designs each year representing the 50 US states, the nation’s five overseas territories, and the federal district of Washington DC. As the releases in this series near the end, the 2019 ATB Coins debut with the 2019 Lowell National Historical Park issue. This is the first issue of 2019, which is the last year with a full five designs set for release. 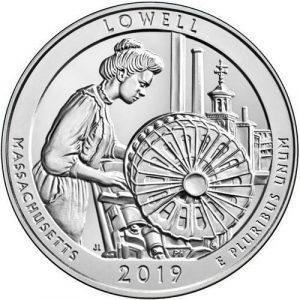 On the reverse side of the 2019 5 oz ATB Lowell National Historical Park Silver Coin is the image of a woman working on a power loom in one of the many textile mills found in 19th and 20th century Lowell, Massachusetts. Out of the window in the background, you can see the clock tower at Boott Mill. Engravings around the edge of the design field include “Lowell,” “Massachusetts,” “E Pluribus Unum,” and “2019.”

The obverse side of the 2019 ATB Coins continues the use of President George Washington’s iconic effigy. This left-profile portrait of the nation’s first president was created in 1932 by John Flanagan. It debuted on the nation’s circulation 25-cent piece in that year to mark the 200th anniversary of Washington’s birth. Based on a bust created in 1786 by William Cousins, this effigy of President Washington remains on the quarter today and features prominently on the obverse of ATB quarters. Engravings include “United States of America,” “Liberty,” “In God We Trust,” and “Quarter Dollar.”

The 2019 ATB Lowell National Historical Park Coin is one of the more unique releases in the collection in that it not only represents a specific state, but also a very particular location within that state. Lowell National Historical Park preserves several city blocks within the city of Lowell, Massachusetts. The city is situated along the Merrimack River 25 miles northwest of Boston, the city was incorporated in 1826 as a mill town. Named after Francis Cabot Lowell, a local figure, the city would become a prominent cog in the Industrial Revolution that swept the United States during the latter half of the 19th century and early 20th century.

Lowell is well-known as a textile base in the northeast during the Industrial Revolution. The Merrimack River played a major role in this as the city’s industries were able to harness the power of the river. As the river moves through Lowell, it drops a total of 30 feet over just 1.2 miles. This drop produces 7,460 kilowatts of power that was harnessed over the years by waterwheels and other hydropower systems.

The clock tower at Boott Mills features prominently in the design on the reverse of the 2019 Lowell National Historical Park Silver Coin. Boott Mills represented an extensive group of cotton mills built in the city in 1835. The buildings in the Boott Mills complex were constructed alongside a power canal system. The company behind the cotton mills was founded by Kirk Boott. Today, the buildings of the Boott Mills complex are the most intact in Lowell more than 180 years after their construction and are a central piece of Lowell National Historical Park.

Lowell National Historical Park was established in 1978 after the previous establishment of Lowell Heritage State Park. Today, the park is operated by the National Park Service and consists of different sites throughout the city related to the region’s era of textile manufacturing. The park covers 141 acres of land and sees roughly 520,000 visitors annually. Notable features within the park beyond Boott Cotton Mill include The Francis Gate, Pawtucket Dam and Gatehouse, and the Suffolk Mill Turbine and Powerhouse.

The 2019 5 oz ATB Lowell National Historical Park Silver Coins come in a variety of different options suitable for both investors and collectors buying silver. The two primary options come directly from the United States Mint through authorized dealers. These include the bullion version of the coin and the Burnished ATB coins. All coins in the collection boast 5 Troy oz of .999 pure silver with a face value of $.25 (USD). Details on the bullion and burnished coins include:

The US Mint does not set mintage figures for its ATB Coins, but you will generally see much higher figures for the investment-grade bullion coins compared to the Burnished ATB coins. In either case, the coins are struck to meet demand from buyers. Beyond the primary 2019 ATB coins mentioned above, you’ll find one other option available.

This option is the Colorized ATB Coin. The United States Mint does not colorize any of its coins directly at its facilities, but you can find 2019 Colorized ATB Coins available from third-party authorized dealers who add a layer of colorized lacquer to bring the US Mint’s designs to life in vivid colors. These Colorized ATB Coins are often extremely limited in availability and ship with display boxes. The colorized coins were originally bullion versions of the ATB coins that had the colorization added.