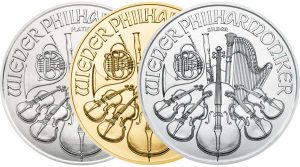 The gold, silver, and platinum coins in the Austrian Philharmonic series share the same design elements on the obverse and reverse each year. The obverse of all coins includes a depiction of the Great Organ. This massive musical instrument is found within the Musikverein Golden Concert Hall that is located in the national capital of Vienna’s Innere Stadt neighborhood. The face value, year of issue, nation of issue, weight, metal content, and purity are all engraved on this side of the coin.

On the reverse of all Austrian Philharmonic coins is a collection of musical instruments used by members of the Vienna Philharmonic Orchestra. While the members of the orchestra use various instruments, the items included in this design are a cello in the center, two violins on the sides, and a background field that includes a harp, horn, bassoon, and flute.

The designs of the Austrian Philharmonic collection were created in 1989 by Thomas Pesendorfer. His obverse and reverse designs are used on all three versions of the coin. Pesendorfer originally planned to become a sculptor and followed an educational path to achieve that goal. He attended the College of Metal Design in Steyr, Austria. Following his completion of educational courses at the College of Metal Design, he started training at the Austrian Mint. The first coin he designed for the mint was the 20 schilling coin featuring a portrait of Joseph Haydn, an Austrian composer. As of 1993, Pesendorfer is the Chief Engraver of the Austrian Mint and his most high-profile designs are found on the Austrian Philharmonic coins.

History of the Austrian Mint

Founded in 1194, the Austrian Mint has a unique background story. Duke Leopold V of Austria was responsible for founding the mint and used a payment of 15 tonnes of silver paid to him by England’s King Richard I, better known as Richard the Lionheart, as a bounty to secure his release from prison. Leopold V had imprisoned Richard I and his troops on their return from the Third Crusade in the Middle East as a result of a previous insult.

Today, the Austrian Mint is located in the national capital of Vienna. It is the official sovereign mint of the nation responsible for producing Austrian Euros for circulation and produces the Austrian Philharmonic Coins.

Get Your 2019 Austrian Philharmonics Now at JM Bullion!

All coins in the Austrian Philharmonic Series are currently available for presale online from JM Bullion. If you have questions when buying these coins, please don’t hesitate to ask. Our customer service team is available to you at 800-276-6508, online using our live chat, and via our email address. Don’t forget that you can also follow us on Facebook and check in weekly with our blog for the latest information on all our new and upcoming products.