Australia’s Deadliest Features a Threat from the Deep: The Great White Shark

If you regularly buy silver from the Australian continent, you are well aware that there are two mints producing high-quality bullion coins. The Perth Mint is a state-owned entity of Western Australia, but it is the Royal Australian Mint in Canberra that serves as the sovereign mint for the nation. The Royal Australian Mint has been increasingly active in the production of bullion coin collections in recent years, with its Shipwreck Series and the “Australia’s Most Dangerous Series.” The latter collection is now on its second release with the image of one of the continent’s deadliest predators: the Great White Shark. Below you can learn all about the details of this new coin release. 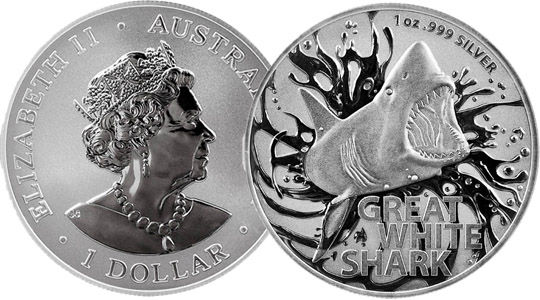 On the reverse field of the 2021 1 oz Australian Great White Shark Silver Coin, you will find the horrifying image of a Great White on the attack. The massive shark is breaking the surface of the water, shooting straight upward like a missile as it moves in on its prey. The Great White Shark Silver Coin’s design shows the splash of water as the beast emerges from the depths with more than half of its body up out of the water in this design. The most terrifying part of the design is the presence of its razor-sharp teeth. The average Great White has more than 300 teeth in its mouth arranged in several rows. These teeth allow the aggressive predators to tear into victims and rip off large chunks. Most Great White Sharks tear large chunks of flesh off prey and swallow it whole.

The obverse side of the 2021 Australian Great White Shark Silver Coin features the now prominent effigy of Queen Elizabeth II. This is the sixth-generation effigy of the Queen to feature on Australian coins and was initially designed for the Royal Mint of England in 2015 by Jody Clark. The bust of the Queen captures her full neckline and shoulders in an Australian coin portrait for the first time since 1966. Included in the design are the George IV State Diadem Crown, earrings, and the Victorian coronation necklace.

The Great White Shark is the second coin design in the Australia’s Most Dangerous Series. The coins are available with only individual packaging that consists of protective acrylic capsules. Each coin has 1 Troy oz of .999 pure silver in Brilliant Uncirculated condition with a face value of $1 (AUD) that is fully backed by the Australian government. The mintage maximum for the coins is 25,000 in total.

Known as the Carcharodon Carcharias, the Great White Shark is one of the most feared creatures on the Australian continent and arguably one of the most featured animals in the world’s oceans. The massive creatures can reach up to 20 feet in length and can cruise through the water at a speed of 24.85 MPH. When attacking its prey, the Great White Shark can propel itself to a speed as fast as 35 MPH. The Great White is also known, as seen in this design, to propel itself up out of the water when attacking certain prey. In fact, this is the moment in which you can see the characteristic of the animal that gave it its name. While the top of the body on the Great White is actually grey, its belly is white.

Continue Your Collection with the Great White Shark at JM Bullion

If you have already purchased the Redback Spider coin in this series, you can continue growing your collection with the new 2021 Great White Shark coin. Please feel free to reach out to JM Bullion with your questions at 800-276-6508, chat with us live online, or email us directly. We also encourage you to follow us on Facebook and read our weekly blog posts for greater insight.